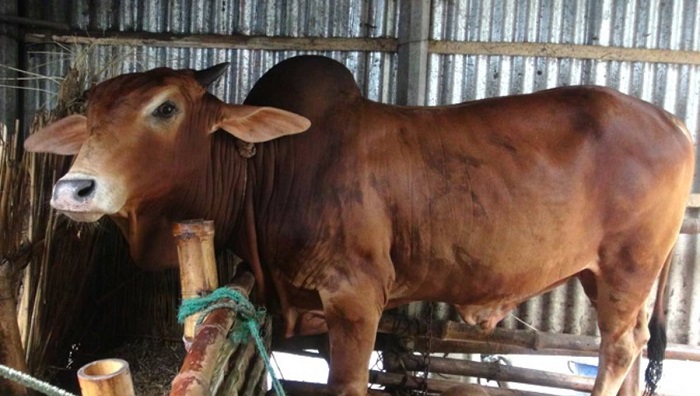 Livestock farmers are now busy nurturing cattle in 5,000 cattle farms  in nine upazilas of Faridpur ahead of Eid-ul-Azha, the second largest festival of Muslims when over one crore cattle are sacrificed across the country.

Visiting Munshidangi, Munshi Bazar, Baitul Aman areas, it was found that the farmers and their family members taking care of their cattle from dawn to dusk.

They were seen preparing grass, straw, mustard oil cake and fortified molasses  for their cattle.

Officials at district Livestock Department said more than 50,000 sacrificial animals are ready in the district for the Eid-ul-Azha.

They are expecting to supply those to other districts after fulfilling the local demand, they said.

They claimed that farm owners received training from the department and were rearing their cattle without using harmful steroid and injection.

Mostafa Bepari of Munshidanga area said, “We've worked round the year to prepare cattle for this festival with the hope of earning a good profit.”

“We'll get the expected profit only if the Indian cattle are not smuggled into the country,” he added.

Mostafa further said they did not use any harmful chemical for fattening their cattle this year.

“We urge the authorities concerned to take steps  to halt smuggling of cattle from India to ensure fair prices for local farmers,” he said.

District Livestock officer Dr Nurul Ahsan said cattle are being reared in 5,120 farms this year which was 3920 in the previous year.

Dr Nurul further said the department has been assisting farmers from the beginning and will supervise till the cattle are sold.

“We suggested the farmers not to use harmful chemicals and steroid for fattening cattle.”

The farmers cultivate sufficient Napier grass which is suggested to be used as main cattle feed instead of harmful ingredients, he added.

According to the Animal Feed Act 2010, the use of antibiotics, growth hormones, steroids or other harmful chemicals in animal feed are strictly prohibited. For violating this law, a person might face up to one year's imprisonment or up to Tk 50,000 in fine or both.