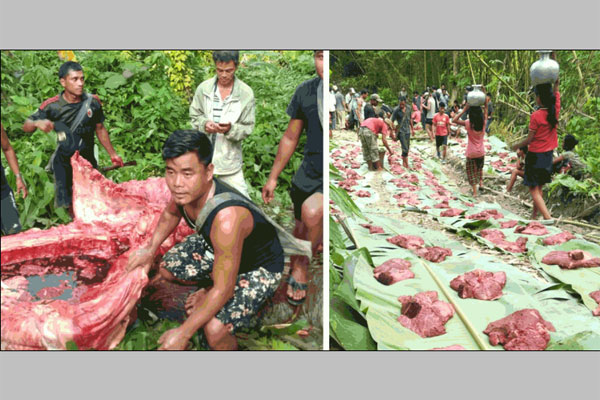 People in Mizoram recently feasted on meat of an elephant. And it is sad that the Mizoram Forest Department is still sleeping over the bizarre episode.

A 47-year-old captive elephant, Laxmi, died few days ago in the Kanhmun Forest Range in Mamit district of west Mizoram, bordering the Jampui hills of Tripura.

In a most bizarre occurrence, the body of the dead elephant was sliced, and the meat was distributed and consumed openly by the villagers.

Suparna Ganguly, co-founder trustee of the Wildlife Rescue and Rehabilitation Centre, Bangalore, on Monday, registered a complaint with Noyal Thomas, head of the Project Elephant Division of MOEF&CC about the incident.

There are several other elephants (all from Assam), who are overworked and are in poor physical condition and health in Mizoram, Ganguly said.

Surprisingly, the Mizoram Forest Department is yet to register a case on the death of the elephant and subsequent bizarre incident of people feasting on the meat.

The Chief Wildlife Warden of Mizoram said elephants from Assam, especially from the Barak Valley often come to Mizoram, and accordingly, grazing permit is issued.

But, in case of the elephant, Laxmi, the owner, one Md. Mastufa Ahmed Laskar of Sonai in Cachar district of Assam had leased it to one Pu Khualhina of  Kanhmun in Mizoram for carrying heavy logs in the jungle.

Interestingly, Assam Forest Department officials still don’t have information on Laxmi being leased out to someone in Mizoram for carrying logs in the hilly jungle.