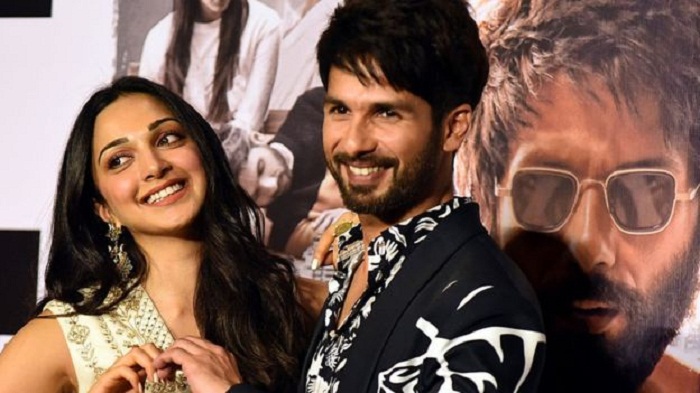 A new Bollywood film, Kabir Singh, is being described as misogynistic even as it has set box office coffers ringing. But this is hardly a new problem in India's biggest film industry, writes the BBC's Divya Arya.

Kabir Singh is the story of a man who becomes addicted to alcohol and drugs after his girlfriend's family refuses to accept their relationship, and marries her off to someone else. The movie hit the screens on 21 June and has divided opinions sharply.

The lead character - played by actor Shahid Kapoor - is a man-child who belittles his girlfriend, Preeti Sikka, tries to control her life and objectifies women. The lead female role is played by Kiara Advani.

Singh is volatile and violent - in one scene, he threatens to rape a woman at knifepoint when she refuses to have sex with him. He eventually backs off, but it's no credit to him.

His character is neatly summed up by film critic Shubhra Gupta: "Here's a fellow who thinks that going through life yelling and shouting, snorting-and-drinking on the job, assuaging his raging libido with crass directness, basically being a sexist so-and-so, is an acceptable thing."

This is not an exclusively Bollywood problem - Kabir Singh is a remake of Arjun Reddy, a hugely successful Telugu film from 2017 that also drew criticism for celebrating what was, in effect, an abusive relationship.

And this is not the first time an Indian film has irked people for its treatment of women. Misogyny is not just commonplace in many Bollywood scripts but it is also deeply rooted in the industry. Stalkers are often glorified, toxic masculinity is normalised and even molestation is justified as a legitimate form of courtship. Films driven by strong female leads are rare, but women, including leading heroines, frequently appear in titillating dances.

But in a country battling patriarchy, sexist stereotypes and endless violence against women, the movie's creation of a hero out of a bully has been questioned by many. 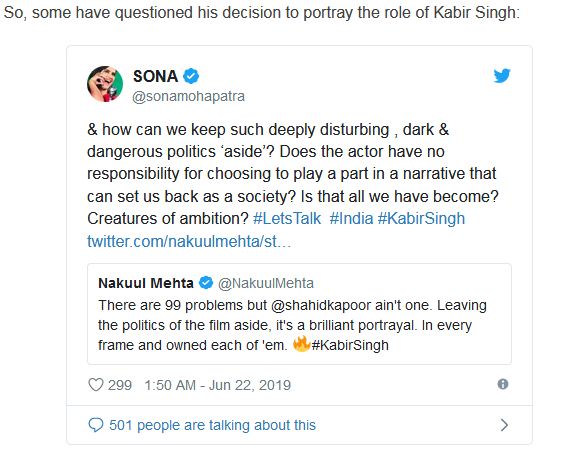 And yet, the film has had a great opening, having earned more than 708m rupees ($10m; £8m) in just three days. Many have also lauded Kapoor for his "intense" performance.

The 38-year-old actor has starred in several critically acclaimed films, including Udta Punjab, which revolves around the drugs crisis in Punjab state, and Haider, which adapts Shakespeare's Hamlet to tell the story of a conflicted young man in Indian-administered Kashmir.

Kapoor has defended his character. "There are all kinds of people in real life, including alpha-males who feel territorial entitlement, and I have played this character truthfully," he told journalists recently.

But film critic Anna Vetticad has taken issue with justifying such a narrative in the name of depicting reality.

"This is exhausting, but for the zillionth time: it is not the depiction of reality that is objectionable here, it is precisely because violent, destructive misogynists do exist and women for centuries have suffered at their hands that it is deeply troubling when a film portrays such a person as cool, funny, and, as Kapoor puts it, a man with 'a good heart' who 'loves purely' and 'wears his emotions on his sleeve'," she wrote in her review of the film.