'This is not war': Fans make peace as India crush Pakistan 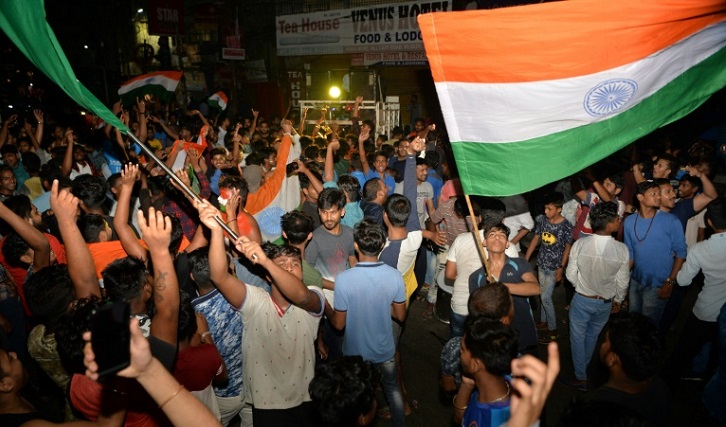 Passionate fans from both sides of cricket's fiercest rivalry preached sporting peace after India's World Cup thrashing of Pakistan on Sunday in front of an estimated global TV audience of a billion people.

India extended their unbeaten World Cup run against Pakistan to seven matches with an 89-run victory in front of a vociferous, sellout Manchester crowd, largely down to Rohit Sharma's superb 140 off 113 balls.

Pakistan, chasing an initial 337 to win were always behind the run-rate and finished on a rain-interrupted 212 for six, well short of their revised target of 302 in 40 overs.

Despite the volatile political relations between the two countries, the majority of fans were determined that the sporting battle remained good natured.

"India and Pakistan have long been rivals in the cricket field but we have to move on from the hatred," Amit Jain, an Indian at the match told AFP.

"This is not war, so take it as a game. All those news channels that were trying to spread hate are looking for some other news now.

"This is done and dusted for them. So we should realise this and grow up," the 43-year-old London businessman added.

Most of the Pakistan supporters trudged away from Old Trafford early when rain interrupted with their team struggling at 166 for six after 35 overs.

When the match resumed, Pakistan were left with a virtually impossible revised target of 136 more from five overs.

"India is a great team, no doubt about it and (India captain Virat) Kohli is a man who leads from the front," said dejected Pakistan fan Ashraf Ali.

"It was fun sitting along side our Indian friends and watching a good game of cricket. That's how it should be. Peace is what we need."

In India and Pakistan it was approaching midnight by the time the game ended.

At a packed outdoor screen in Gurgaon outside New Delhi, hundreds of people were glued to the game before the rain started during Pakistan's innings, many of them with Indian flags and painted faces.

"Today the josh (patriotic enthusiasm) is at the top of the level. I can't express in words," Indian fan Satyam Mishra said in Gurgaon.

Some started to dance and celebrate as Pakistan's batsmen began to falter and the match tilted in India's favour.

"Thank God we are warring on the cricket field rather than warring between our borders," Avaneesh Damaraju, a 17-year-old student, told AFP.

Fans in Islamabad braved the heat to watch the match on big screens in a public park, but they began to thin out rapidly as Pakistan's loss became inevitable.

"My Pakistani patriot tweet for the day: It is just a game," tweeted former ambassador to the US, Husain Haqqani.

Others were less sanguine.

"My thoughts and prayers goes out to the television sets across Pakistan," tweeted one user along with a photograph of a man aiming an automatic weapon at a TV set airing the match.