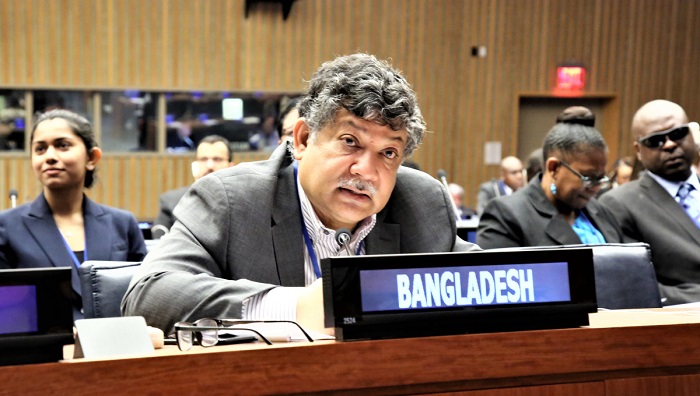 Bangladesh has put special emphasis for the development and inclusion of persons with disabilities towards inclusive socio-economic development.

Permanent Representative (PR) of Bangladesh to the UN Ambassador Masud Bin Momen passed the remarks at the 12th Conference of the State Parties to the Convention on the Rights of Persons with Disabilities (CRPD) at UNHQs on Thursday.

He said that Bangladesh has not only put considerable efforts in increasing their access in day-to-day life but also updated the national legislations in line with the CRPD and Agenda 2030.

“Saima Wazed Hossain, the daughter of Prime Minister Sheikh Hasina, has been an ardent advocate in this field and championing awareness-building on autism in particular and disabilities in general in the country, the region and beyond as the WHO SEARO Goodwill Ambassador and Chairperson of National Advisory Committee on Autism,” the ambassador added.

He said that the National Human Rights Commission, NGOs and private sector companies have joined the efforts of the Government.

Mentioning several development initiatives of government in this sector, the PR said, “The country shall provide allowances for all of the 1.4 million differently abled persons from July. Currently, 1 million of such people are getting allowance.”

Ambassador Momen focused on the success stories of the youth with disabilities in various fields such as sports and innovations.

Drawing the example of Vashkar Bhattacharjee, a visually impaired Bangladeshi youth who was recognised by UNESCO for his innovative use of ICT for Digital Empowerment of Persons with Disabilities by developing Bangladesh’s first Accessible Dictionary in four forms for people with visual, print and learning disabilities, the PR said, “These examples are greatly inspirational for their peers to strive for empowerment.”

Ambassador Masud said, “Through ‘Digital Bangladesh’ campaign we are doing our bit but we need more partnerships to reach desired level of ‘disability inclusion’ for which our development partners should come forward.”

Bangladesh is one of the early signatories of the CRPD and its Optional Protocol. The CRPD was adopted by the UN General Assembly by its resolution 61/106.