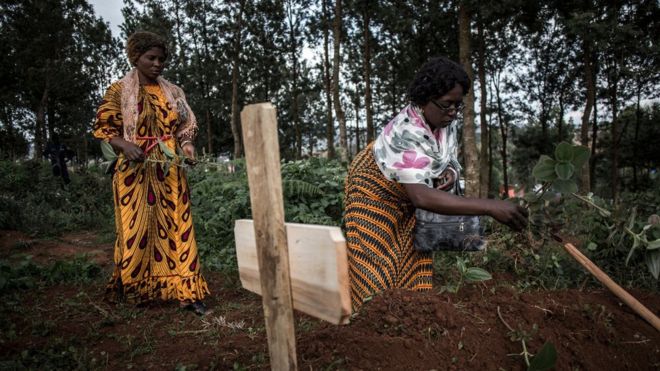 The world is entering "a new phase" where large outbreaks of deadly diseases like Ebola are a "new normal", the World Health Organization warns.

The WHO said countries and other bodies needed to focus on preparing for new deadly epidemics.

#  It progresses to vomiting, diarrhoea and both internal and external bleeding.

#  People are infected when they have direct contact through broken skin, or the mouth and nose, with the blood, vomit, faeces or bodily fluids of someone with Ebola.

#   Patients tend to die from dehydration and multiple organ failure.

There have been 2,025 cases of Ebola and 1,357 deaths from the virus during the outbreak in the Democratic Republic of Congo.

So why are modern outbreaks so much bigger?

"We are entering a very new phase of high impact epidemics and this isn't just Ebola," Dr Michael Ryan, the executive director of the WHO's health emergencies programme told me.

He said the world is "seeing a very worrying convergence of risks" that are increasing the dangers of diseases including Ebola, cholera and yellow fever.

He said climate change, emerging diseases, exploitation of the rainforest, large and highly mobile populations, weak governments and conflict were making outbreaks more likely to occur and more likely to swell in size once they did.

Dr Ryan said the World Health Organization was tracking 160 disease events around the world and nine were grade three emergencies (the WHO's highest emergency level).

"I don't think we've ever had a situation where we're responding to so many emergencies at one time. This is a new normal, I don't expect the frequency of these events to reduce."

As a result, he argued that countries and other bodies needed to "get to grips with readiness [and] be ready for these epidemics".

The outbreak in DR Congo continues to worry health officials.

Tackling the disease has been complicated by conflict in the region - between January and May there were more than 40 attacks on health facilities.

Another problem is distrust of healthcare workers with about a third of deaths being in the community. It means people are not seeking treatment and risk spreading the disease to neighbours and relatives.

Dr Josie Golding, the epidemics lead at the Wellcome Trust, said the world needed to get better at preparing for such outbreaks.

"With Ebola in West Africa, that was the mobility of people and porous borders - that is now the world we live in, that won't stop," she said.

Climate change could lead to more outbreaks like cholera in Mozambique after Cyclone Idai, she said. But she hoped diseases resulting from humanitarian crises would not be a new normal.

"Preparedness needs to be better, we can see movement of populations and climate change, a lot of this we can see coming, and we need more resources to plan and prepare."