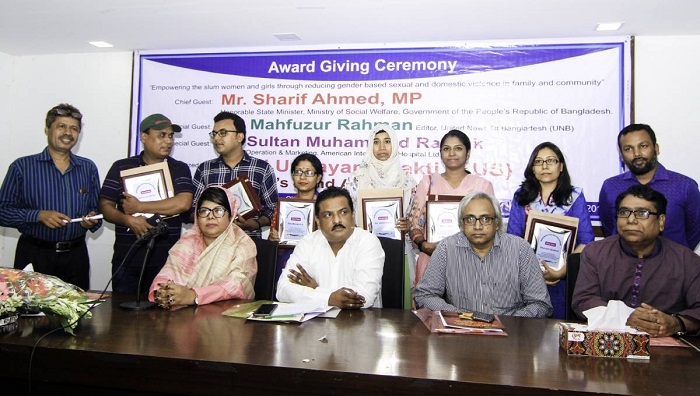 The government is planning to amend the existing law to ensure the equal rights of men and women to ancestral property, said State Minister for Social Welfare Sharif Ahmed on Tuesday.

“The government is considering bringing a change in the law to ensure the equal rights of men and women to ancestral property. Women won’t suffer from a sense of economic insecurity if they get the equal rights to property,” he said.

Sharif came up with the remarks while speaking at an award-giving ceremony at the Jatiya Press Club. Nari Unnayan Shakti (NUS) arranged the programme with support from Women’s Fund Asia.

The NUS awarded seven journalists in two categories -- print and electronic media -- for their special reports on ‘Empowering slum women and girls through reducing gender-based sexual and domestic violence in family’.

Those who got the award from electronic media are Sharmin Ibrahim Luna of Bangla Vision (1st), Sheikh Humayun Kabir Surjo of News24 (2nd) and Naznin Akter of Mohona TV (3rd).

Speaking as the chief guest, Sharif said women empowerment is a must for the country’s economic development. “Women must be engaged with the mainstream economy to build a prosperous Bangladesh.”

The state minister said the government is working sincerely to make women economically independent and ensure safer workplace and environment for them.

He said ensuring economic independence of women is very important for protecting their rights and empowering them.

He urged journalists to focus on violence against women and women empowerment to bring a positive change in society.

About the growing violence against women and children, he said, “I personally think media can play a vital role in combatting this menace.”