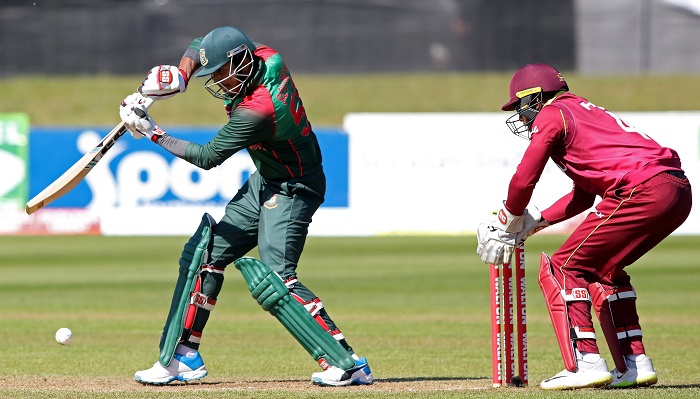 Bangladeshi Tigers on Monday got their expected victory against West Indies in their second meet at Malahide int Dublin. Bangladesh won the match by 5 wickets with 16 balls remaining.

After Tiger bowlers fought hard to restrict Caribbeans to 247 for 9, Soumya Sarkar and Mushfiqur Rahim struck fluent half-centuries and dominated the chase.

While batting, Soumya's came in the spotlight, his 54 off 67 balls getting Bangladesh off the block quickly. After they had lost three quick wickets in the middle-overs to Ashley Nurse, Mushfiqur put together two partnerships, 83 runs for the fourth wicket with Mohammad Mithun, and 50 runs for fifth wicket stand with Mahmudullah, to boss the chase.

After Tamim Iqbal struck the fourth ball of Bangladesh's chase for a thumping four, Soumya piled the pressure on Sheldon Cottrell and Roach, hitting them for a six and four boundaries in the first five overs. Tamim then cover drove Cottrell, before getting two more fours off Nurse in the ninth over.

But later in the same over, Nurse bowled Tamim with one that dipped on the left-hander, and struck his leg-stump.

After their 54-run opening stand, Soumya added 52 runs for the second wicket with Shakib. During this partnership, Soumya survived two chances: at short cover when Allen couldn't quite hold on to the chance diving forward, as well as Roach dropping a straightforward chance at short midwicket.

Nurse who suffered the Roach drop, struck twice in his next over. He first had Shkaib caught at short cover, before Sunil Ambris caught Soumya at short midwicket.

Things could have gone worse for Bangladesh had Nurse sent a better throw to wicketkeeper Hope when Mithun, batting on 7, slipped mid-pitch after being sent back by Mushfiqur in the 24th over. Mithun also survived Roach dropping him at deep square leg when he was 22, and eventually the Mushfiqur-Mithun pairing made West Indies pay heavily.

There was to be one more fielding lapse: Mahmudullah, dropped by Hope off Holder when he was on 10, before the game was done.

When they batted first, West Indies once again gave away a good start against Bangladesh during this tri-nation series. They were 89 for 2 in the 20th over when Mustafizur had Roston Chase caught at midwicket. Ambris and Hope had struck six fours in the first five overs before Ambris guided Mashrafe to Soumya at slip. Darren Bravo fell for yet another low score, when Mehidy Hasan had him lbw for six. Mehidy had dropped Bravo in the previous over.

Chase and Hope had added 33 runs for the third wicket, before Chase and Jonathan Carter fell in the space of four overs. With the scoring rate falling drastically, Holder slammed two fours to break a 103-ball boundary drought.

Holder and Hope added exactly 100 runs to revive the West Indies innings, but with both batsmen falling in the space of 12 balls, Bangladesh got back control. They conceded just two fours and a six in the last six overs, as West Indies reached the underwhelming score.