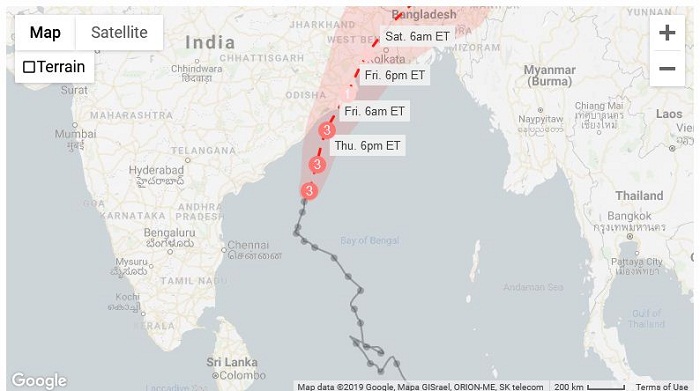 India is preparing for the strongest landfalling tropical cyclone in nearly five years, as Tropical Cyclone Fani moves up the east coast of the subcontinent.

Fani, located in the Bay of Bengal roughly 270 kilometers (170 miles) off of the coast of the Indian state of Andhra Pradesh, has intensified significantly over the past couple of days and could strengthen further as it nears the coast over the next 24-48 hours.

As of Wednesday, Fani had winds of 195 kph (120 mph), which would make it equivalent in intensity to a Category 3 major hurricane on the Saffir-Simpson scale.

The last time India had a storm equivalent to a major hurricane (Category 3 or greater) make landfall was Tropical Cyclone Hudhud in 2014, according to records from NOAA.

Tropical cyclone-force winds greater than 60 kph (39 mph) will begin to spread over the states of Andhra Pradesh and Odisha on Thursday as the storm parallels the coastline for more than 24 hours before finally making landfall on Friday in Odisha.

Red Warnings (the highest level) have been issued for extremely heavy rainfall and dangerous sea conditions on Friday in Odisha and Saturday in West Bengal.

Odisha officials have canceled schools across the state for Thursday and Friday due to the storm.

Fani strengthened rapidly on Monday and Tuesday, becoming the strongest storm to move through the Bay of Bengal this early in the year since Tropical Cyclone Nargis in 2008.

Nargis went on to strike Myanmar with winds over 200 kph (124 mph), bringing a devastating storm surge and flooding rainfall that resulted in more than 100,000 deaths in the country.

Fani is expected to reach the coast equivalent to a major hurricane (winds greater than 175 kph or 110 mph), which will bring a large storm surge of several meters and significant wind damage near the landfall location.

In addition to the wind and storm surge, inland flooding will also be a major threat.

Portions of eastern India and Bangladesh can expect 150 to 300 mm (6 to 12 inches) of rain with locally higher amounts regardless of the intensity.

As Fani approaches India it will be moving nearly parallel to the coast. A slight move to the east or west would have a significant impact on the timing of landfall as well as the intensity. A more easterly track means that landfall would be farther north in India, perhaps even into Bangladesh.

If that happens, the storm would likely be a category or two weaker as it moves over cooler waters.

Fani is the first tropical cyclone of the year in the northern Indian Ocean.

The season doesn't have a defined start and end like the Atlantic basin season, but it does have two main periods of activity: late April to early June, and October to November.

Tropical cyclone activity during the monsoon season is extremely rare because the monsoon is characterized by high wind shear, which makes it difficult for tropical storms to form.