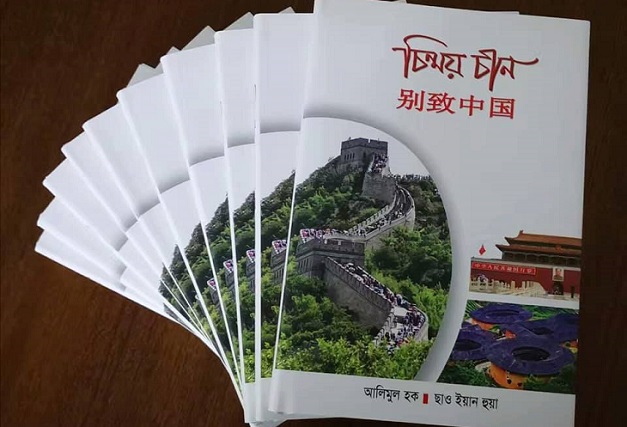 Chinmoy Cheen, a book co-authored by Alimul Hoque of Bangladesh and Cao Yan Hua of China, has successfully brought alive the natural, cultural and historical beauty of China. As the book has explored and unfolded the East Asian country in a manner like never before, it has seemed to me a unique addition to the list of Bengali travelogues.

After reading the book, I have reached the conclusion that the authors who have chequered journalistic career have proven their worth in documenting the true essence of China in the title. Though they have made the sights and sounds and smells of the different beautiful places, rituals and historical memories of China come alive, they have efficiently struck a fine balance in storytelling and facts in the book.

The descriptions of the book will make any readers want to pack bags to take a trip to China to experience the abundance of beauty of the country and this very thing has set the book apart from any other travelogues, especially of Bengali language.

The book published by the Colour Creation has depicted the stories of the writers' journeys to the close vicinity of nature, culture, history, civilisation and people of China. The writers have shown their mettle as a prolific storyteller by articulating recollections of their travels and that panoramic view of different tourist spots including natural treasures-- hills, forests, seas, rivers-- and cities with the most skyscrapers have come alive in the travelogue.

In my eyes, the prolific authors have demonstrated their distinctiveness in sharing treasured memoirs of their journeys to some world heritage sites including the Great Wall in China. Because, with their superb storytelling style, they have manifested their excellence in enlivening the stories for readers in the Chinmoy Cheen.

In a word, the book is a brief documentation of China and anyone can get an overall introduction of the country, its people, history, culture and civilisation. The 215-page title has covered almost all important sides of China including its famous and miraculous architectural structures, festivals, foods, charm of vast and mosaic landscapes, lifestyles of ethnic minorities, and history of dynasties to name a few.

From the book published in Dhaka, Bangladesh, readers can briefly learn historical chronology of China, know the names of UNESCO-recognised world heritage sites and different provinces, and administrative regions of the most populous country of the world. Besides, panoramic photos put together with almost every description in the title have spoken for themselves and thus enlivened the narrations to readers.

Giving a superficial illustration of its amazing fauna and flora, Chinmoy Cheen has also incorporated brief descriptions of spirituality of the Chinese to give readers an understanding of the practices of religions in China. In so doing, the book has shed light on the influence of Confucianism, Taoism, Buddhism and Islam in the Chinese society.

As both the authors of the travelogue are journalist by profession, they could show mastery in sorting out topics to present in the book out of enormous interesting things about vast nation like China as journalists are to pick up most important news for readers from the later’s perspectives every day.

The simple and concise but informative and interesting format of its sentences can’t but charm every critic and curious readers of the Bengali literature, especially of the travelogue genre. The title is an interesting food for thought for travelogue writers and the travel-loving people. Moreover, those who are keen to know China in details, the book can provide them with necessary information about the East Asia nation.

The last but not the least, the distinctive side of the title is its extraordinariness of diction which has increased its literary value to superb level. The effective phrasing and wording has made the book a rare and unique creation of Bengali literature and that It will remain an interesting and well read for Bengali bibliophiles forever.

The writer is the Diplomatic Correspondent of the Daily Sun. He is currently studying journalism in Beijing, China.