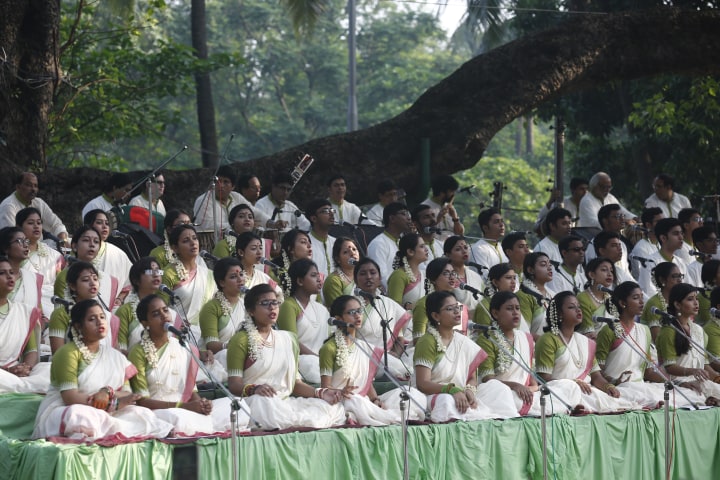 Today marks the Pahela Baishakh, the first day of the Bengali calendar. The cultural arena across the country is all set to celebrate the day with an array of cultural programmes.

The programmes of the day will begin in the city with the musical soiree of Chhayanaut, a leading cultural organisation of the country at Ramna Batamul at dawn.

A Baishakhi Mela is set to begin at Bangla Academy today on the occasion of Pahela Baishakh, the first day of Bengali New Year 1426.

Surer Dhara, a leading cultural organisation in the country in association with Channel i, Unilever Bangladesh Limited, will celebrate Bangla New Year 1426 through a gala event titled ‘Lever ayush Hazaro Konthe Borshoboron 1426’ with a thousand voices of talented artistes from across the country under the supervision of Tagore singer Rezwana Chowdhury Bannaya.

Just like the previous years, the gala celebration will held on the open premises of Bangabandhu International Conference Center (BICC) in the capital’s Agargaon area today.

For the 8th time, Channel i will celebrate the beauty and confidence of the youth through an event for the New Year.

The day-long event will feature group and solo musical performance, recitation, dance, drama, seminar, speech, discussion and screening of the documentary and others.

Besides, local satellite television channels and radio stations will air an array of programmes to mark the day.

Boishakhi TV arranged an elaborate programme to mark the day. A Baishakhi concert titled ‘Aloker Jhorna Dhara’ will be telecasted from Jamtola of Ramna today at 10:30am.  Organised by Dhaka Metropolitan Police, Nogor Baul Jemes, Oyshee, Kornia and enlisted artistes of DMP will perform in the concert.  Produced by S Ali Shohel, the concert will continue till 05:00pm.

ATN Bangla will air a Comedy Magazine titled ‘Rajar Otithi’ at 11:00pm tonight. Prominet personalities of the country including poet Asad Chowdhury will  participate on the programme.

Duronto Television will start broadcasting programmes of SEASON 7 from today.

The new series Moner Jadukor’s premiere will be held at 8:30 pm today on Duronto TV.

Besides, a special programme titled Lathi Dance will be aired on the channel at 05:00pm today.

Two stage shows of popular theatre troupe Swapnadal’s much acclaimed production Chitrangada will be held at the studio theatre hall of Bangladesh Shilpakala Academy at 05:00 pm and 07:00pm respectively today.

Chitrangada, based on an epic story from the Mahabharata, has been written by Nobel laureate Rabindranath Tagore when he was 31 years old.

Zahid Repon will direct the play.