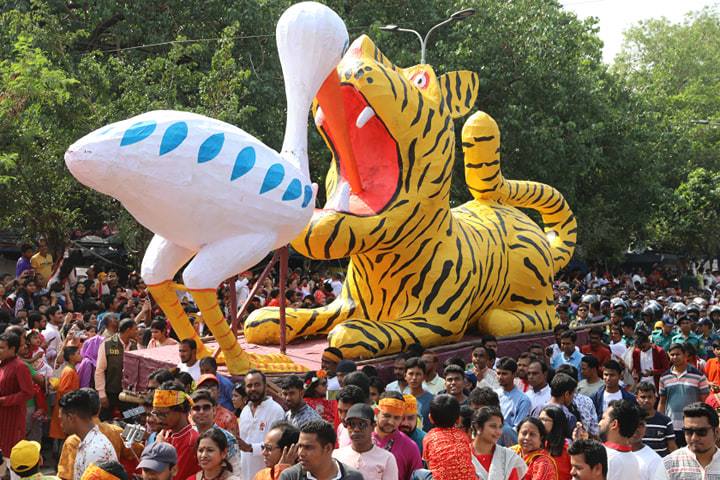 Pahela Baishakh, the first day of Bangla calendar, is being celebrated amid traditional festivities and enthusiasm across the country on Sunday.

The festivities began at dawn with the artistes from Chhayanaut welcoming the day with Tagore’s famous song ‘Esho hey Baishakh, esho, esho (come O Baishakh, come)’ under the banyan tree at the Ramna Park.

People of all walks of life gathered at different popular spots at dawn in capital Dhaka and elsewhere to welcome the Bangla New Year, 1426.

The celebrations of Pahela Baishakh have become an integral part of Bangalees since it began over six centuries back.

Mughal Emperor Akbar introduced the Bangla calendar in 1556 of the Gregorian calendar in a bid to streamline the timing of land tax collection in the then ‘Subah Bangla’ region, the much of which falls under Bangladesh.

On the occasion, President Abdul Hamid and Prime Minister Sheikh Hasina issued separate messages conveying their New Year's greetings to the people of the country and all Bengla-speaking people across the world.

Traders and shopkeepers across the country opened ‘Halkhata’ (new book of accounts) and entertain customers and visitors with sweets on the first day of the New Year as part of the tradition and culture.

Students of the Institute of Fine Arts of Dhaka University brought out a ‘Mangal Shobhajatra’ (procession of good wishes) around 9:45 am as part of the festival. The procession will end at the DU campus after parading different roads through Shahbagh.

The marchers will not wear masks this time in line with police security orders, but will carry them along with birds of various kinds.

On November 30, 2016, the United Nations Educational, Social and Cultural Organisation (UNESCO) recognised the Mangal Shobhajatra as a cultural heritage, which has added more importance to this festive day.

Men wearing panjabi-pyjama, women attired in saris with red borders and children in colourful dresses all thronged traditional Baishakhi Mela (fair) and other cultural functions in the city and elsewhere across the country.

Meanwhile, extensive security measures have been taken in the city and elsewhere across the country for smooth celebrations of the day.

Several watchtowers have been set up while adequate searchlights arranged in Ramna Batamul area.

Besides, a number of mobile courts were deployed in Ramna and Dhaka University areas to avoid any act of sabotage.