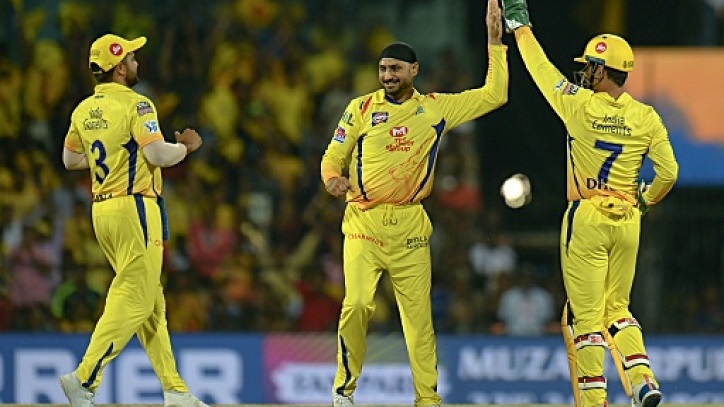 Singh and South African leg-spinner Imran Tahir claimed three wickets each to dismiss Royal Challengers for a paltry 70, a total the defending champions achieved with 14 balls to spare in Chennai.

Captain Mahendra Singh Dhoni, who led the Super Kings to their third IPL title after returning from an illegal gambling ban last year, elected to field first in the 12th edition of the world's most popular Twenty20 league.

The 38-year-old Singh got Super Kings their first breakthrough after sending back opposition skipper Virat Kohli for six in the fourth over of the innings.

Singh ran through the Royal Challengers top-order with his wily off-spin, getting the big wickets of England's Moeen Ali for nine and South African AB de Villiers, also for nine.

West Indies batsman Shimron Hetmyer was run out for nought and soon the Royal Challengers batting crumbled with spinners Tahir and Ravindra Jadeja, who took two wickets, combining to pack them off in 17.1 overs.

"It was a very good bowling effort by him (Harbhajan) to give us a kind of start that was very well capitalised by the other spinners," Dhoni said after the win.

"The wicket definitely needs to be much better, even with dew it was spinning big... other teams have good spinners as well and this isn't the pitch we are looking forward to," Dhoni said of the pitch at Chennai's MA Chidambaram Stadium.

Opener Parthiv Patel top-scored with 29 and remained the only batsman to cross double figures in what was the IPL's sixth lowest total.

Chasing 71 for victory, Super Kings lost opener Shane Watson for nought after Yuzvendra Chahal got the Australian bowled with his leg-spin.

Ambati Rayudu, who made 28, and Suresh Raina, who scored 19, then put on 32 runs for the second wicket to get the chase on track.

The left-handed Raina became the first batsman in IPL history to cross the 5000-run barrier during his 21-ball stay. Raina (5004) is ahead of Kohli (4954) in the IPL batting chart.

Ali dismissed Raina and Rayudu was cleaned up by paceman Mohammed Siraj. Kedar Jadhav, on 13, and Ravindra Jadeja, on six, took the Super Kings home.

"No one wants to start like this, but it's good to get a game like this out of the way -- this early in the tournament," said Kohli, who is yet win an IPL title.

"I thought CSK played really well, they deserved to win, but I loved to see our team fighting all the way."

The T20 extravaganza, tentatively scheduled to end on May 12, runs close to the start of the 50-over World Cup in England and Wales on May 30.

Focus is on disgraced Australian stars Steve Smith and David Warner who are making their returns to the glitzy tournament a year after being banned for ball tampering.

Warner is expected to feature for the Kane Williamson-led Sunrisers Hyderabad who play Kolkata Knight Riders on Sunday.