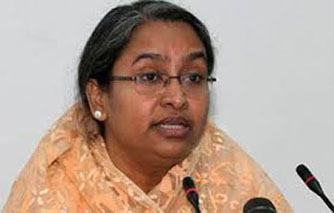 Education Minister Dr Dipu Moni has identified fundamentalism, militancy and terrorism as the major stumbling blocks on the way to women advancement.

“We should raise our voice against fundamentalism, militancy and terrorism to pave the way for smooth access of women to all spheres of development,” she said while speaking at a meeting on the “Banker-SME Women Entrepreneurs Conference and Product Display-2019′ at the Bangladesh Shishu Academy auditorium in the city on Friday.

Dr Dipu said Bangladeshi women are moving forward by participating in all sorts of development activates as various initiatives have been taken under the leadership of Prime Minister Sheikh Hasina for empowering women.

“We will have to keep up the progress of women as they are playing a vital role to develop the country’s economy. Women are now playing roles as entrepreneurs or job holders,” she added.

The education minister urged all to extend their supports to supplement the efforts of the government for advancement of women.

“We will have to focus on manufacturing industries for making the country’s economy export-oriented,” he added. The BB governor said the central bank has already asked the banks to provide entrepreneurship training in all branches across the country.

He informed the amount of distributed credit among the women entrepreneurs increased to Taka 5,118 crore in 2018 from Taka 1,804 crore in 2010.

“That means, the amount of credit distribution in the nine years was increased by four times,” he added.