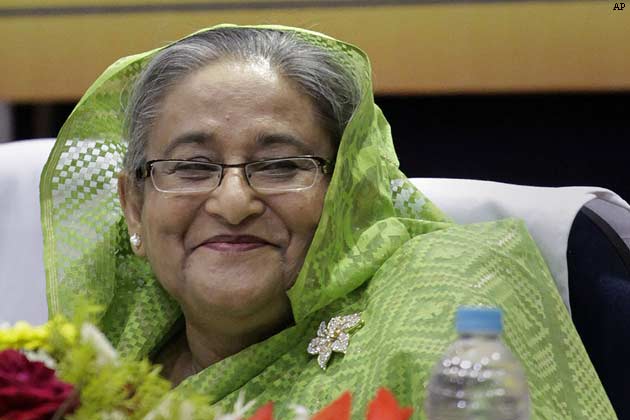 Mohammad Imran, Bangladesh Ambassador to the UAE, will see her off at the Abu Dhabi International Airport.

On February 14, the Prime Minister left Dhaka for Germany on her first overseas tour in her third consecutive term in office to attend a security conference in Munich and a defence exhibition in Abu Dhabi.

During her stay in Munich, Hasina also attended a community reception given by the European Awami League, a dinner programme hosted by President of the World Economic Forum and CEO of Jigsaw Borge Brende Jared Cohen.

Besides, President and CEO of the Siemens AG Joe Kaeser, CEO of the Veridos Hans Wolfgang Kunz, Executive Director of the International Campaign to Abolish Nuclear Weapons Beatrice Fihn, Chief Prosecutor of the ICC Dr Bensouda, separately met her separately during her stay there.

Following the meeting of Siemens CEO with the Prime Minister, the Power Division of Bangladesh and Siemens of Germany signed a document for the construction of a 3600MW LNG power plant at Payra in Bangladesh.

On Saturday night, Sheikh Hasina left Munich for Abu Dhabi and visited the International Defence Exhibition on Sunday, which was arranged by the UAE.

A UAE business delegation, led by its Economic Minister Sultan Bin Saeed Al Mansoori, met the Prime Minister on Sunday and expressed interest to expand the UAE business in Bangladesh making investment in various sectors like energy, port and industrial zone, in a newer way.

During her stay in Abu Dhabi, Bangladesh and the United Arab Emirates (UAE) on Sunday signed four memoranda of understanding (MoUs) on establishing port, industrial park, supply and setting up LNG terminal, power plants and a special economic zone in Bangladesh.

The government of Dubai and Public Private Partnership (PPP) authority under the Prime Minister's Office signed the first MoU to set up a port, dry port and industrial park in Bangladesh.

The second MoU was signed between Emirates National Oil Company (ENOC) and the Power, Energy and Mineral Resources of Bangladesh to supply LNG to Bangladesh on a long-term basis and develop a land-based LNG receiving terminal in Payra.

The third MoU was signed between Sheikh Ahmed Dalmook Al Maktoum and the Power Development Board of Bangladesh (PDB).

On Monday, Sheikh Hasina had a meeting with Crown Prince of Abu Dhabi and Deputy Supreme Commander of the UAE Sheikh Mohammad Bin Zayed Nahyan at his Royal Palace.

On Tuesday, Chairman and Managing Director of Lulu Group Yusuff Ali and Founder and Chairman of NMC Dr B R Shetty called on the Prime Minister at her hotel suite in Abu Dhabi.

During the meetings, the two UAE business giant, Lulu Group International and NMC, expressed their keen interests to make their investment in different sectors of Bangladesh, including healthcare, shopping mall, hotel and tourism sectors.