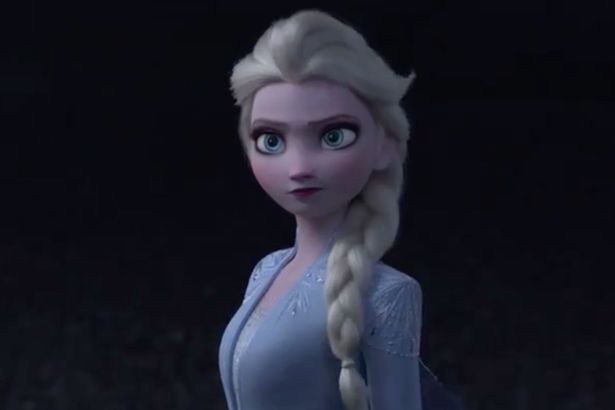 The first trailer for the upcoming Disney Frozen 2 has dropped - and Elsa has changed her appearance.

Queen Elsa is shown on the shore of an icy sea looking out into the storm before dumping her new cape on a rock.

Unlike in the first Disney film, she wears blue leggings and a chiffon skirt over the top of a blue sparkly leotard.

She then pushes her long blonde hair into a ponytail and takes a deep breath, before diving into the freezing waves.

Elsa can then be seen using her powers to freeze the top of the sea and sprint across it, before climbing a huge wave.

But the ice breaks before she can climb to the top of it, and plunges her back into the sea.

Old familiar faces are back in the second Frozen film, including Elsa's younger sister Anna, her love interest Kristoff and Sven the sleigh-pulling reindeer.

Olaf the wisecracking snowman is also back, seen cuddling up to Elsa as she uses her powers to protect him.

Disney's Frozen 2 is set to hit cinemas later this year