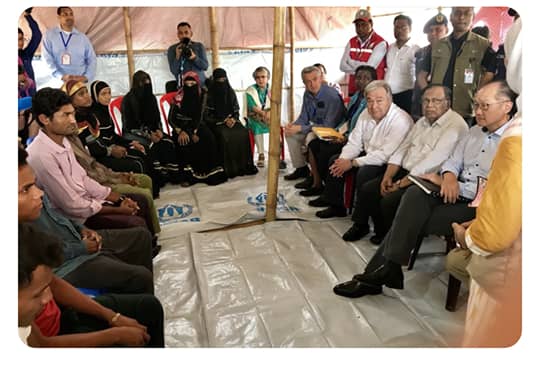 UN Secretary General Antonio Guterres on Monday said the safety of the Rohingyas during this monsoon season is the priority one as they, what he says, cannot allow the monsoons to wash away the hopes of the Rohingyas.

“As many as 200,000 Rohingyas need to be relocated. We cannot allow the monsoons to wash away the hopes of the Rohingya refugees I met today in Bangladesh,” he made remark while visiting Rohingya camp in Kutupalong in the district.

Earlier, he heard "unimaginable” accounts of killing and rape from Rohingya refugees who recently fled Myanmar.

“They (Rohingyas) want justice and a safe return home," he tweeted from Rohingya camp on Monday.

In another tweet ahead of reaching the Rohingya camp the UN Chief said the Rohingyas are one of the most discriminated and vulnerable communities on the earth.

"The Rohingya refugee crisis is a humanitarian and human rights nightmare. I thank Bangladesh for its generosity in hosting the refugees," he said.

He said he is along with Jim Yong Kim in Cox’s Bazar on a mission of solidarity with Rohingya refugees and the communities supporting them.

"The compassion generosity of the Bangladeshi people shows the best of humanity and saved many thousands of lives," he said in another tweet message.

They arrived at Kutupalong at 10:30 am and are now visiting Kutupalong transit centre.

They arrived here at Cox's Bazar airport by a special flight of Biman Bangladesh Airlines at 8:45am.

The visit, an official said, highlighted the “generosity” of Bangladesh in hosting the Rohingyas as well as the need for the international community “to do more.”

They reviewed the situation of the newly arrived Rohingyas in Bangladesh, and assessed progress towards a safe, voluntary and dignified return of refugees, in line with international standards, according to UN officials.

The visit also aimed to lay the groundwork for further dialogue with the government of Bangladesh on medium-term planning for the refugee situation and to reiterate the UN and the World Bank’s support for finding comprehensive solutions to the situation of the Rohingya people, said the UN.

Ahead of the Rohingya camp visit, WB President Kim on Sunday said, “We’re all extremely concerned about the situation of Rohingyas.”

Finance Minister AMA Muhith said Bangladesh certainly wants Rohingyas to go back to their country from Bangladesh with dignity and safety. “That is what we want.”

Terming the situation a humanitarian tragedy, the WB chief said they need to move on this to make sure that the issue is addressed in a peaceful way.

Since August last year, more than 700,000 Rohingya have taken shelter from violence in Myanmar in the Cox’s Bazar district, making it the world’s largest and fastest growing refugee camp, and putting pressure on the environment, existing infrastructure, and social services that were already constrained.