Bali's volcano-hit airport gets back to business 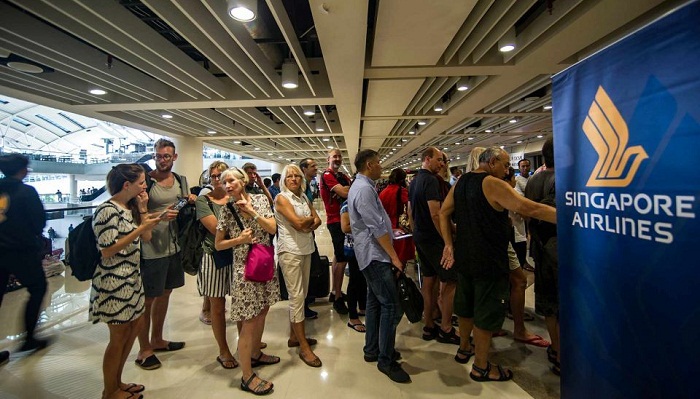 Thousands of foreign tourists were leaving Bali by plane Thursday after an airport shutdown sparked by a rumbling volcano, but some visitors were irate at not being able to get off the Indonesian island paradise sooner.

The alert level on Mount Agung remains at maximum. But a change in wind direction blew towering columns of ash and smoke away from the airport, prompting authorities to re-open the island's main international gateway Wednesday afternoon.

That opened an eagerly awaited window for some of the 120,000 tourists stranded after the surge in volcanic activity grounded hundreds of flights, sparking travel chaos and forcing the evacuation of villagers living in the mountain's shadow.

Ash is dangerous for planes as it makes runways slippery and can be sucked into their engines.

"Things are gradually getting back to normal," said Bali airport spokesman Israwadi, who like many Indonesians goes by one name.

But that wasn't much comfort to some visitors who came to relax in one of the world's top travel destinations but have instead faced repeated flight cancellations, battles over insurance and torrential rain that has lashed the island.

"I have been stranded since Monday night," said Australian Donna Lay.

"We have travel insurance, but mine doesn't cover volcano so I'm just living off my money. I'm covered for health (insurance) but not for accommodation."

Indonesian visitor Yayan was running out of patience.

"I have been waiting since November 27 (Monday)," said the man, whose flight has been cancelled multiple times.

"I got no e-mail or notification from the airline...They should have told me. I am at loss because I have to postpone my business -- I have jobs that I need to handle."

More than 4,500 people have now flown out of Bali's main airport, authorities said, with around 3,200 of them on international flights.

However, the airport on nearby Lombok island -- also a popular tourist destination -- closed again Thursday after ash and smoke drifted in its direction.

The shifting wind was being caused by cyclone Cempaka which is battering Indonesia's main Java island -- west of Bali -- and has left at least 19 people dead in severe flooding and landslides.

Millions of tourists visit palm-fringed Bali annually. The majority are Chinese, followed by Australians, Indians, Britons and Japanese, according to the immigration office, which added that nearly 25,000 foreigners live on the small Hindu-majority island.

Tens of thousands of Balinese have already fled their homes around the volcano -- which last erupted in 1963, killing around 1,600 people.

As many as 100,000 will likely be forced to leave in case of a full eruption, disaster agency officials have said.

While some have refused to leave a 10-kilometre radius danger zone, tens of thousands have filled up evacuation centres, some with respiratory problems linked to the volcanic ash.

"In an evacuation centre there are a lot of people so there are problems such as poor sanitation and diseases can be easily contagious," said Dwi Putra Sudewa, a doctor volunteering at one centre.

"One gets a cough and others can get it too".

While the volcano appeared to be belching less ash and smoke on Thursday, experts warned a major eruption could still happen at any moment. Agung has already experienced a series of mini eruptions.

"The potential for an eruption is still there, but we cannot predict how big it's going to be," said Devy Kamil from the Indonesian volcanology agency.

Agung rumbled back to life in September, forcing the evacuation of 140,000 people living nearby. Its activity decreased in late October and many returned to their homes.

However, on Saturday the mountain sent smoke into the air for the second time in a week in what volcanologists call a phreatic eruption -- caused by the heating and expansion of groundwater.

So-called cold lava flows have also appeared -- similar to mud flows and often a prelude to the blazing orange lava of popular imagination.

Last year seven people were killed after Mount Sinabung on the western island of Sumatra erupted. A 2014 eruption at Sinabung killed 16.