Bangladesh Test skipper Shakib Al Hasan feels that their missed chances in the series-concluding second Test against India  inflicted them the defeat.

The Tigers suffered a narrow three-wicket defeat to India and conceded a 0-2 cleansweep in the two-match Test series, which is part of the ICC Test Championship, at the Sher-e- Bangla National Stadium in Mirpur on Sunday, courtesy of their butter fingers.

Bangladesh dropped three catches and an easy stumping in the first innings while Mominul Haque dropped a regulatory catch of Ravichandran Ashwin at short-leg when he failed to negotiate a turning delivery of Mehidy Hasan Miraz on the fourth day morning.

The hosts were well on top until that catch was dropped considering the fact Ashwin (42 not out) turned the game in their favour by stitching an undefeated 71-run partnership with Shreyas Iyer (29 not out).

“It is slightly disappointing (missing catches). Other teams don’t miss the chances that we are missing. That made the difference. We could have bowled them out for 250 runs instead of 314. There was a chance in the second innings, but it is part of cricket,” Shakib told reporters after the match.

Though Shakib was disappointed with the fielding, he insisted that he is happy with the overall performance and mentality of the team.

He also credited the Indian lower-order for handling the pressure so well.

“I think Ashwin and Iyer both batted well on a pitch that wasn’t easy and credit to them,” said Shakib. 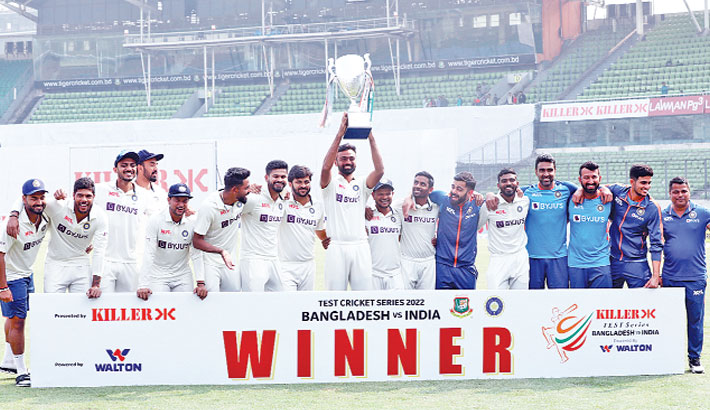 Test series on the fourth day against Bangladesh at the Sher-e-Bangla National Stadium in Mirpur on Sunday.     – TANVIN TAMIM

“I think we tried in every possible way. We fell slightly short, somehow,” he said, adding that he doesn’t regret failing to cross the line despite coming so close.

“There’s no regret. I think we fought well in the whole Test. If we continue having this mentality in future Tests, we will get better results.

“There’s regret not winning a close match but at least we are getting close. Hopefully next year there’ll be a better result,” he said.

“We have 3-5 Tests in 2023. I expect to win all three series, considering the teams we will be playing,” he added.

Bangladesh will play five Test matches in 2023 respectively against Ireland, Afghanistan and New Zealand and all of them will be played at their own den.

Meanwhile, Shakib insisted that though he is not regularly playing first-class cricket, if they want to improve in Tests, they need to introduce more first-class matches.

“I am sure most of the Indian players have more than 100 first-class matches under their belt. I haven't played domestic cricket for a long time, but even those who are playing, how many do they play?  They will need 10 years to reach 80 first-class matches. If we could have done that in five years, we may have better Test players,” he concluded.