Joe Root and Jonny Bairstow both hit hundreds as England continued their resurgence with a record fourth-innings chase to beat India by seven wickets in the Covid-delayed fifth Test at Edgbaston on Tuesday.

No England side had previously made more to win in the fourth innings of a Test than 359, when now captain Ben Stokes' brilliant century led them to a thrilling victory over Australia at Headingley three years ago.

But that record was overhauled with ease after England's first series under a new leadership duo of Stokes and coach Brendon McCullum had seen them chase down seemingly stiff targets of 277, 299 and 296 during a 3-0 whitewash of Test world champions New Zealand.

"It's great fun at the moment," player of the match Bairstow told Sky Sports. "The last month has been a fantastic month of Test cricket for all the lads."

Root was named England's player of the series -- which started under his captaincy in 2021 -- after amassing a mammoth 737 runs, including four hundreds, at superlative average of over 105.

But he preferred to pay tribute to Bairstow, whom he has known since their school-days.

"He's striking the ball so clean, he looks very calm and in control out there," Root said. 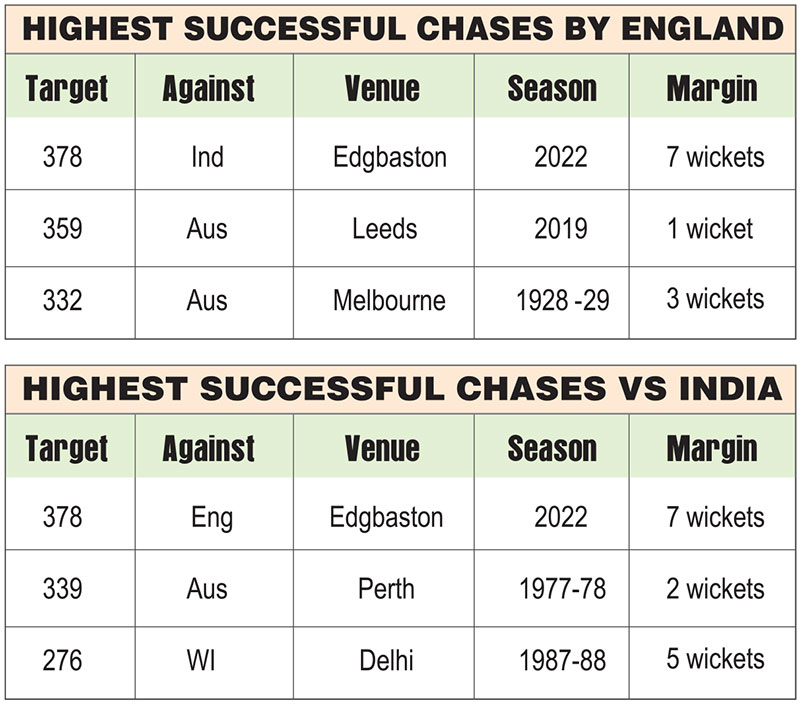 "It's great fun and it's great to see someone I've known from being 12 years old, start to realise his true potential in this format of the game."

England have now won all four Tests since Stokes succeeded Root as captain, with the all-rounder saying: "378 five-six weeks ago would have been scary, but it was good."

India stand-in captain Jasprit Bumrah, leading the side in place of the Covid-hit Rohit Sharma, was the tourists' player of the series with 23 wickets at 22.47 -- a record for an Indian bowler during a Test campaign in England.

"Test cricket is never easy," said the fast bowler. "We had three good days and we were a little short with the bat and we let the opposition in."

Bairstow also became the first England player to hit two centuries in the same Test since Andrew Strauss against India at Chennai in 2008.

It was Bairstow's sixth century in eight Tests in 2022 and Root's fifth in seven.

This decider should have been played in Manchester last September only to be postponed just hours before the start because of coronavirus concerns within the India camp.

Meanwhile, India have been docked two points and fined 40 percent of their match-fee for maintaining a slow overrate at Edgbaston.

They were deemed to be two overs short of their target by match referee David Boon, who imposed the sanction on the team.