Robberies on 15 buses in 2 yrs

14 arrested; several of them involved in raping woman on moving bus

One of the gangs allegedly raped a woman during robbery on a Dinajpur-bound bus from Dhaka.

The information was disclosed in two separate press briefings in the capital on Sunday.

In Ashulia, RAB-8 captured 10 members of one criminal gang when they were getting prepared to commit robbery.

A foreign-made pistol, three bullets, eight homemade weapons and some other things were seized from them, said Commander Khandaker Al Moin, director (Legal and Media Wing) of the elite force, at a press conference held at Kawran Bazaar. 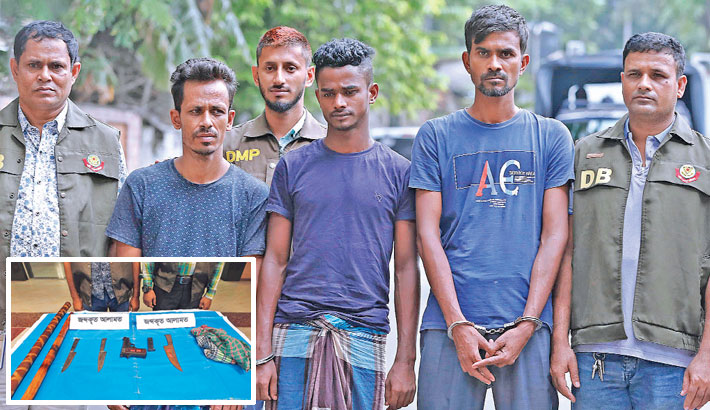 The officer said that a robbery was committed on a Gopalganj-bound bus of Star Line Paribahan at Kashiani in Gopalganj on May 29.

During robbery on a Dinajpur-bound bus, they raped the woman, said the officer.

DB Tejgaon Division of Dhaka Metropolitan Police nabbed four members of another gang in the capital’s Shah Ali area on that night.

A foreign pistol, three private cars, a microbus, a knife and some other things were seized from them, said Harun-or-Rashid, joint commissioner (DB, North) of the DMP at DMP Media Centre on Sunday.

Two cases were filed against them at Shah Ali Police Station.

Digital devices to be a key export earner: PM

Specialised hospital set up in Ukhiya