Asphalt paving on the roadway of the much-hyped Padma Multipurpose Bridge began on Wednesday.

In a major progress of the project, the installation of all the spans was completed on December 10 last year, making the whole steel truss double-deck bridge visible.

Later, 2,917 pre-cast roadway slabs and 2,959 railway slabs were installed on the steel structure.

The installation of the roadway slabs ended on August 23 on piers 12 and 13 at the Mawa point.

Subsequently, CMBEC carried out experimental carpeting on a 60-metre portion of the roadway from piers 40 to 41.

Project engineers said they will primarily complete carpeting on 300 metres on piers 40 and 41. Currently, 2.5 inch carpeting is being done and later, 1.5 inch more carpeting will be required over it.

Primarily, a waterproof membrane layer is being carpeted and then asphalt carpeting will be done and different layers will reach 100mm in total thickness.

It will take four months to complete the total carpeting work, the engineers said.

The bridge’s top deck will be dedicated for road transport and the lower deck for rail connectivity.

Prime Minister Sheikh Hasina inaugurated the work on the main bridge on December 12, 2015. So far, the main bridge’s work advanced nearly 90 percent. The total cost of the project is Tk 301.93 billion.

According to revised deadline, the bridge is expected to open to traffic in June next year.

Once implemented, the bridge will establish a direct road link between the capital and 21 south and southwestern districts while establishing rail connectivity with some districts with no railway facility at present. 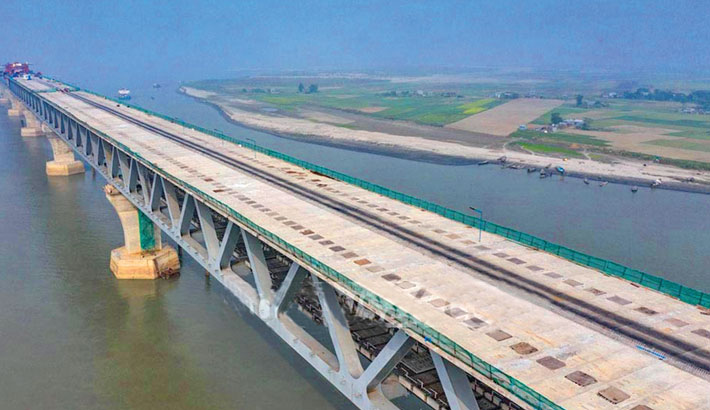