Science is but an image of the truth, says Francis Bacon. You may differ with him on the point. But there is no denial of the fact that the modern human civilisation is the blessings of the science. Science is inseparable part of our life. Medical science is that branch of science without which existence of mankind cannot be imagined.

Human beings have intense bondage with nature. In the primitive age, they were dependent upon nature for treatment of any disease. The nature is flooded with herbs with medicinal values. In those days, herbs could not be processed well for lack of scientific knowledge.

As a result, diseases like cholera and diarrhea used to sweep away villages after villages causing procession of deaths. People had to rely on armlet, healers, and other superstitions for cure. Now, people have subjugated those diseases due to advancement of medical science. Adam Smith says ‘Science is the great antidote to the poison of enthusiasm and superstition.'

Now-a-days, we are fully dependent upon science for treatment and other purposes. The present healthcare system is the cumulative results of longstanding scientific research. The medical science research is antique. Hundreds years prior to the birth of Christ, philosophy, science and treatment started to develop. Greek civilization was head of others in terms of all branches of knowledge. Later, ancient Egyptian Muslim and Indian scientists contributed a lot to fluorescent of medical science. In the 18th century, clinical trial gave a scientific shape to the medical research. In the post WII context, the medical science research got massive advancement. Bangladesh still lags behind in this regard. However, BSMMU has gone a long way towards medical research, while ensuring quality treatment of the people of the country. The university has achieved global recognition for its excellence.

Bangabandhu Sheikh Mujib Medical University is not only imparting quality treatment but also conducting medical research. There is no alternative to research for achieving ability to provide ailing people with quality treatment. We have to march towards innovation of new technologies in line with the rest of the world. It can be done through scientific research. 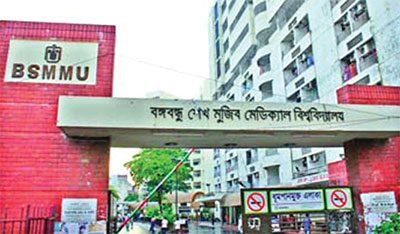 Before creation of BSMMU, there were 13 public and five private medical colleges in the country. Besides, five post-graduation institutes, including National Institute of Preventive and Social Medicine (NIPSOM), were struggling to improve quality of education and research in the important lifesaving field. After independence, Bangladesh Medical Association had been demanding a medical university to be equipped with research and autonomy to the medical colleges.

Twenty one years into martyrdom of Bangabandhu, Awami League formed government led by his daughter Prime Minister Sheikh Hasina. The physicians became optimistic about development in the sector as the premier took various milestone steps. On April 3, 1998, she transformed IPGMER to BSMMU to ensure people’s right to healthcare as enshrined in the Constitution.

Although the university named after Father of the Nation started journey to create international standard physicians, BNP-Jamaat decided to close the highest seat of medical education. After coming to power in 2001, the coalition government took vindictive step within three years of formation of the country’s only medical university. It decided to grant previous shape (IPGMER) to the institution.

We were engaged in countrywide movement protesting the decision of the then government. Pro-BNP doctors’ association DAB and employees let loose violence attacking and suing us to stop the movement.

However, teachers of universities, physicians, officials, employees and people from all strata of the society expressed solidarity with us and participated in the movement. Against the backdrop, BNP-Jamaat government did a flip-flop by allowing the university. But it removed the name of Father of the Nation from nameplate. It allowed the university to run under the short name of BSMMU. The then government also conspired to relocate the university in Gazipur or Tungipara or any other place.

The daughter of Bangabandhu came to power through landslide victory in parliamentary polls in 2008 and took further step to revamp BSMMU as a centre of excellence. The Honb’le Prime Minister allocated 12 bighas of land for expansion of the university campus and allowed Tk 525cr. The university authorities have been able to expedite induction of new cabins, blocks, oncology building, new outdoor department, modernized ICU, OT complex and medical convention centre under direct supervision and assistance of Prime Minister Sheikh Hasina.

For the betterment of freedom fighters, Prime Minister Sheikh Hasina has taken several initiatives, including special allowance and preservation of quota for employment and other fields. As part of it, a special cell has been formed in Bangabandhu Sheikh Mujib Medical University, which is on trial to offer free-of-cost treatment and diagnosis and arrange separate cabin for freedom fighters.

Since the establishment of the medical university, its first Vice Chancellor Professor Dr M A Kaderi had been working tirelessly to standardise and modernise it. All medical colleges are now offering higher degrees following the residency programme pioneered by him in the university. The higher education should be enhanced further based on the demand for specialists. Degrees of all medical colleges and post-graduate institutions are made equivalent after affiliating them with the university. As a result, higher medical education has spread with enhanced quality. At the same time, the quality of services has also been upgraded. Because of the evening practice of specialist physicians and professors and 24/7 laboratory facilities, the common people are now availing themselves of develop-country-like healthcare at affordable cost. Starting emergency units, arranging institutional practice of teachers and physicians, giving allowance to doctors for additional duties, organising transportation facility for teachers and ensuring good governance in administrative work are need of the hour.

Initiative has been taken to establish a 1000-bed Bangladesh-Korea Friendship Hospital in association of the Bangladesh government and with financial and logistic support from Korean government, which is another success.

Prime Minister has expressed her dissatisfaction over the current state of research in the country. But now we are working by giving added importance to research so that the BSMMU can be established as a role model for research across the world. We have already published the results of the genome sequencing study of Covid-19. Studies have shown that about 98 percent of the total infections are Indian or Delta variants. There is also ongoing research on cadaveric transplants. We have also published the results of research on vaccine recipients of Covid-19. It was found that 96 percent of those who received vaccines have developed antibodies in their bodies.

It is hoped that Bangabandhu Sheikh Mujib Medical University will rise to prominence in the world as an international standard university through international network connectivity in providing advanced medical services and advanced medical education and research. This medical university established after the name of Bangabandhu will be successful if all the stakeholders carryout their responsibilities properly.