Arms are being smuggled into the country through at least 30 points along the border despite a crackdown on illegal arms traders by law enforcement agencies.

Small firearms are being smuggled into the country from India and Myanmar through border points of many districts, including Chapainwababganj, Satkhira, Jashore, Meherpur and Chuadanga, despite a crackdown by the border guards, intelligence sources said.

The sources said consignments of illegal arms reached the country recently through border points of Benapole, Sharsha and Chowgachha of Jashore, Debhata, Kaliganj and Kalaroa of Satkhira, Maheshpur of Jhenaidah, Daulatpur of Kushtia and various points of Chuadanga.

Hundreds of members of the arms trafficking ring are trading in arms across the country, despite strict surveillance by law enforcement agencies. Thus, these weapons are being spread all over the country.

Police, Rapid Action Battalion (RAB) and other intelligence agencies have received this information from the arms dealers who have been arrested in different parts of the country recently.

The illegal arms are promptly distributed among miscreants across the country, including in capital Dhaka. Apart from their legal weapons, many influential people keep collecting illegal weapons, intelligence sources said.

Though law enforcers have arrested members of several smuggling rackets in recent days, the masterminds remained largely out of their reach.

Detectives arrested five illegal arms traders along with eight foreign pistols from the capital’s Darussalam area on September 1. The arrestees are the members of a transnational illegal firearms trading gang.

One of the arrested members of this gang is Akul Hossain, general secretary of Sharsha upazila unit of Bangladesh Chhatra League (BCL) in Jashore and former vice-president of the district BCL.

During interrogation Akul admitted that he and his associates had sold more than 200 weapons in the last seven years. All of these firearms were brought from India.

They told police that they collected weapons from multiple border areas of the country. Mashiur Rahman, deputy commissioner (Detective Branch of Dhaka Metropolitan Police) of Gulshan Division, said the five members of the inter-district arms trading racket arrested from the Darussalam area gave various information about arms trade. Multiple teams of police are working to arrest their accomplices.

Sources at the Police Headquarters said a new list has been made after receiving information from the arrested traders. Work has also started to check and sort it out. It was learned that a nationwide crackdown will be launched as per the instructions of the Home Ministry once the coronavirus situation comes under control.

A senior official at the Police Headquarters said there are at least 30 weapon along the border. A list of factories has been sent to Range DIGs and superintendents of police.

According to some SPs, a directive with a list of factories has come from the Police Headquarters regarding arms dealers. The directive called for increased surveillance in the country’s bordering areas.

The SPs said they have been instructed to bring those who have contacts with the arms factories to book after monitoring them.

After receiving instructions, they have started work, they said.

Arms dealers on remand said gunrunners of India and Bangladesh are involved in the illicit trade. In exchange for a little money, they crossed the border and reached to the specific place.

Hundreds of members of the gang are trading in arms across the country, bypassing the strict surveillance of law enforcement agencies.

AKM Hafiz Akhtar, DMP additional commissioner (DB), said, “Shocking information has been revealed from the recently arrested arms dealers. We got a list of those who bought these weapons. We’ll look for those weapons.” 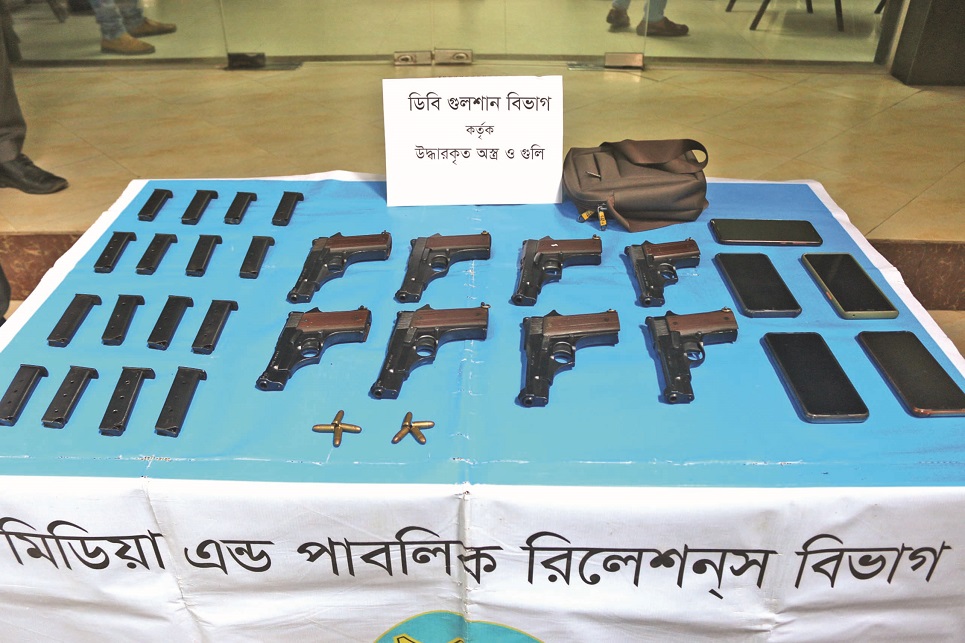