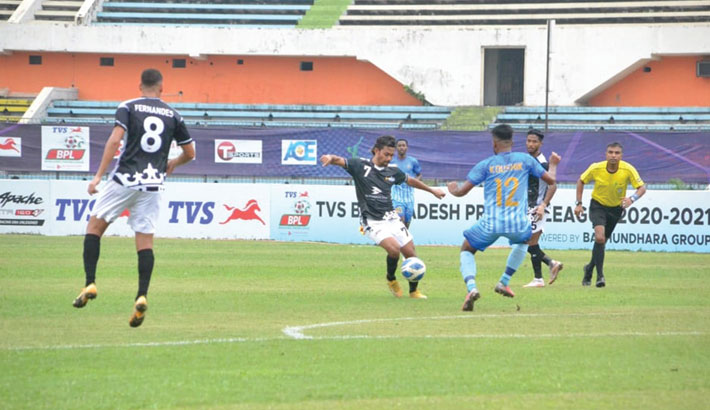 A Bashundhara Kings player runs with the ball during their Bangladesh Premier League football match against Chattogram Abahani at the Bangabandhu National Stadium in the capital Sunday. – BFF PHOTO

Bashundhara Kings’ 22-match unbeaten run came to an end on Sunday after they conceded a shocking 1-2 defeat against Chattogram Abahani in their 18th match of the ongoing Bangladesh Premier League at the Bangabandhu National Stadium.

Chattogram’s Nigerian forward Idenyi Chinedu Mathew scored a brace to help his side clinch an unexpected victory over the table-toppers and earn three points from the match.

Despite the defeat, Kings are still at the top of the table with 49 points. Chattogram Abahani, on the other hand, now have 31 points after 18 matches.

The reigning BPL champions last conceded a defeat to the same opposition when they lost by a 3-4 margin last year at their home venue in Nilphamari.

Kings, however, made a dominating start in Sunday’s match but failed to score any goal in the first half.

In the 39th minute, Mathew broke the deadlock with a powerful right-footed angular shot from inside the box, off a short pass from defender Nasirul Islam Nasir.

After halftime, Kings got a chance to equalize the margin while they were rewarded with a penalty, but their Argentine star Raul Oscar Becerra missed the target.

Kings finally got relieved when Robinho scored the equalizer with a right-footer nearer to the box in the 87th minute.

However, Matthew scored a sensational goal in the 89th minute by managing to escape five Kings players from his own half that confirmed Chattogram Abahani’s victory.

the day’s other match, Dhaka Abahani Limited conceded a 2-4 thrashing against Muktijoddha Sangsad Krira Chakra at the same venue.

Second-placed Abahani now have 36 points from 18 matches while Muktijoddha are in 11th place with 14 points after 17 matches.