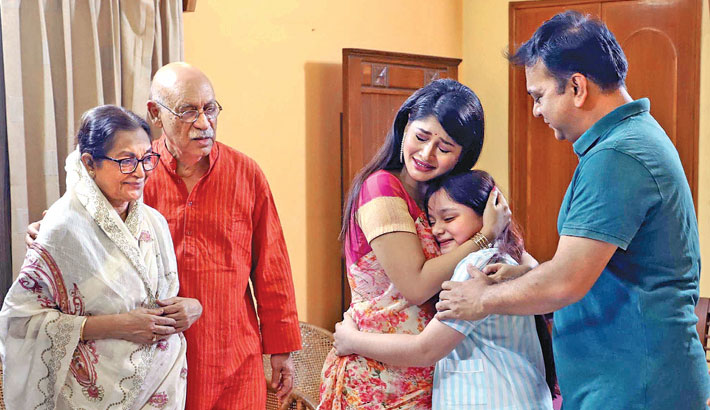 A scene from ‘Juger Hujuge’

Hanif Sanket is a popular television host, writer, director and producer. He is best known for the television show ‘Ityadi’. Hanif Sanket always comes up with special dramas on the occasion of every Eid. He is going to present a special drama titled ‘Juger Hujuge’ on the upcoming Eid-ul-Azha.

‘Juger Hujuge’ is a family-centered drama, which also has a social message for the audience. The story of the play revolves around a father, mother, son and son-in-law, and granddaughter. The drama will show the relations between parents and their children, the generation gap, the emotional conflict between family members and the effect of misuse of technology.

About the drama, Hanif Sanket said, “I occasionally make dramas. That’s why I always try to present something special so that all family members can watch. I showcase the social inconsistency through my drama. For that, each of my dramas has a social awareness message. Technology has advantages and disadvantages too. How it's affecting our family life and relation I’ve tried to bring this in ‘Juger Hujuge’.”

The title song of the drama is written by Mohammad Rafiquzzaman while music is composed and sung by AP Shuvo.

‘Juger Hujuge’ will be aired on ATN Bangla at 8:50pm on Eid day.