An Agonising Wait Outside

The port city reports a record single-day spurt of 955 cases; No admission of general patients to CMCH 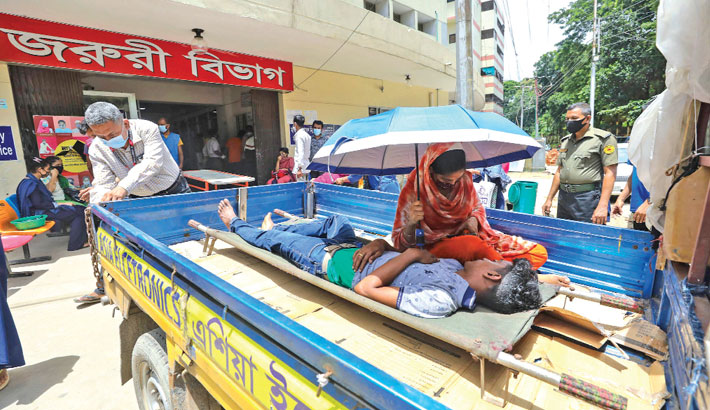 With holding an umbrella open to protect them from the scorching sun, wife of Delwar, who shows symptoms of Covid-19, waits in a pick-up van in front of the emergency department of Chattogram Medical College Hospital on Tuesday to get her ailing husband admitted. They came from Dewanhat area amid strict lockdown for better treatment as Delwar’s health deteriorated rapidly. —Rabin Chowdhury

CHATTOGRAM: With the increasing number of corona patients, the situation continues to worsen everyday breaking the previous records in the Chattogram city and district.

The both government and private hospitals are about to overflow with the patients especially in city area. It has been causing the hospitals mainly the government ones to face difficulties in providing treatment with the limited capacity.

Sources said a total of 955 people were infected with the lethal virus while 10 more died in the district in 24 hours till Tuesday morning.

It is the highest detection of Covid-19 in a single day in Chattogram after recording the first case on April 3 last year, sources said.

Of the dead patients, six were from different upazilas in the district and four from the city.

Of the infected patients, 636 were from the city and 319 from different upazilas.

Besides, a total of 14 people died of Covid-19 on Sunday in the district which was the highest death toll after detecting the first one on April 9 last year.

On the other hand, the critical patients are suffering much as there is no empty bed at the Incentive Care Units (ICU) of the both government and private hospitals.

To cope with the situation, Chattogram Medical College Hospital (CMCH) authorities have already announced not to admit general patients and conduct surgery without critical ones to ensure proper treatment for the corona patients on Monday.

CMCH Director Brigadier General Humyun Kabir said they had to stop general admission and surgery for increasing patients at the corona ward.  “We are trying to provide best treatment with limited manpower though increasing the bed capacity,” he said.

CMCH now has 300 general and 10 ICU beds for corona patients. Against the capacity, some 243 patients were admitted and no ICU was available till filing this report on Tuesday evening.

Besides, Chattogram General Hospital (CGH) having 143 general and 16 ICU beds was providing treatment 140 patients at general beds on that day.

Of the ICU beds, 15 were filled with critical patients while rest one was temporary damaged, CGH Residential Medical Officer Dr Tanjim said.

On the other hand, although private hospitals have sufficient beds for the Covid-19 patients, their excessive charges are beyond the affordability of the lower and middle-class people, said sources.

Private Park View Hospital Deputy General Manager (DGM Admin and HR) Md Humayun Kabir said they have 50 general and 10 ICU beds for the Covid-19 patients. Some 63 patients were undergoing treatment at general and ICU beds of the hospital on Tuesday.

“We are facing pressures to provide medication to the additional patients at general beds while the ICU beds also always remain as filled with critical patients,” he said.

Besides, Imperial Hospital Limited (IHL) having 56 general, 12 ICU and 17 HDU beds capacity were providing treatment to 51 patients at general beds on Tuesday.

Sources in the Chattogram district Civil Surgeon office said government hospitals have a total of 950 beds for Covid-19 patients while private hospitals around 1,000 in Chattogram.

But, Railway Hospital and Holy Crescent Hospital (used as second unit of CGH) are not providing treatment for the corona patients. But, their 300 beds are still kept included in the list of 950 beds of government hospitals.

So, there are actually 650 beds available at government hospitals including those of the 15 upazilas in the district.

Upazila health complexes get less corona patients as rural people are reluctant to receive treatment while some of them rush to the city for admission.

Besides, government hospitals have 43 ICU beds against the 112 beds of private hospitals for the Covid-19 patients.

A total of 413 patients were undergoing treatment at general beds of the government hospitals against the capacity of 450 beds in the city till Monday.

Regarding the excessive cost at the private hospitals, Mizanur said the hospitals have to expend additional money for ensuring residential and transportation facilities for the medical staff including the physicians.

However, if there is any specific allegation, they will take action against the hospital, he assured.

Regarding the shortage of beds at the two government hospitals, Chattogram Civil Surgeon Dr Sheikh Fazle Rabbi said that Railway Hospital is used for quarantine of expatriates while Holy Crescent Hospital, the second unit of CGH, will be introduced soon for the corona patients.

The civil surgeon also admitted that the costing at private hospitals is excessive compared to the government ones.

“I always encourage the people to rush to the government hospitals for better treatment despite having some limitations,” he said adding that patients should check the bill before payment and challenge the authority if find any irregularity.