‘Rani’ the smallest cow in the world! 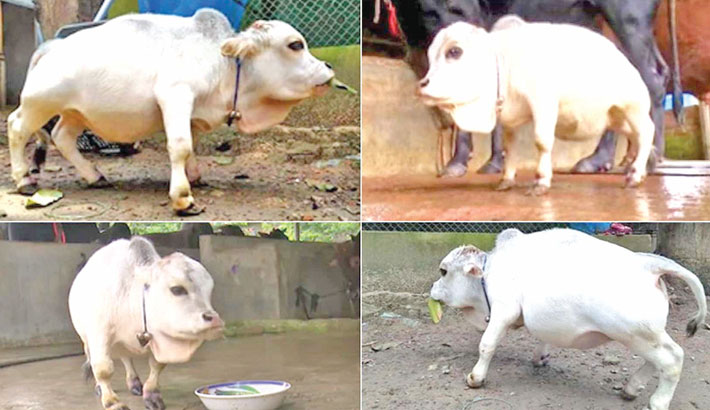 The two-year-old Rani that is only 20 inches tall and weighs only 26 kg becomes focus of attention ahead of Eid-ul-Azha. — photo collected

A cow that is believed to be the world’s smallest one in Ashulia of Savar has grabbed the attention of local people ahead of the Eid-ul-Azha.

The record for the smallest cow in the world is held by a four-year-old red mannequin from the Indian state of Kerala.

However, it has been left behind by the cow, Rani, of Charigram village in Ashulia, which has been reared on a farm in the village. It is only 20 inches tall and this two-year-old cow of “Boxer Bhutti” breed weighs only 26 kg. The asking price for the cow is Tk 5 lakh.

The owner of the cow, Shikar Agro Limited of Savar, said that they bought the cow from a farm in Naogaon two years ago. She has to be fed twice a day. It takes much less food than normal cows. It is now fit to be slaughtered.

An application has already been sent to the Guinness Book of World Records on July 2 to recognise it as the smallest cow.

The Guinness World Records has also issued a reply to the request. They said they have their own process.

After the process, they will complete their tasks within the next 90 days and come to a decision.

If everything goes right, Rani will get the official badge of the smallest cow in the world. Bangladesh is going to overtake India in the world record of small cattle if it passes the test.