BCB to solve problems of both umpires, umpiring 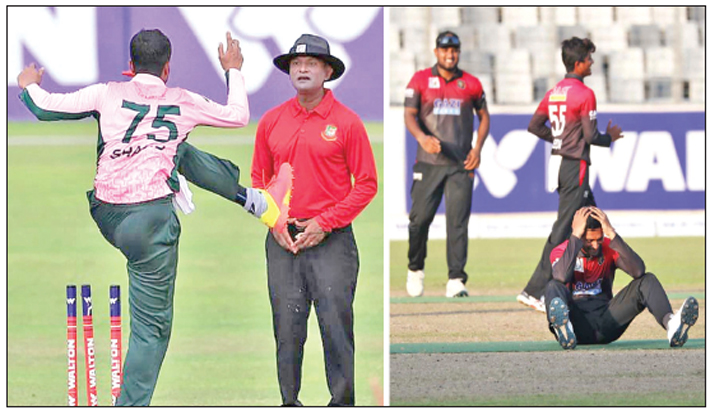 Bangladesh Cricket Board seemed determined to improve the image of their umpire unit considering it faded to great extent in the recent past.

BCB President Nazmul Hassan Papon recently called several members of the umpires unit at his residence to learn about the problems that the umpires have been facing on and off the field.

The umpiring in domestic cricket came under scrutiny after the infamous gesture of Shakib Al Hasan during the recently-concluded Bangabandhu Dhaka Premier Division T20 League that went viral within minutes across the world and it earned him both suspension and fine.

Shakib, who was leading Mohammedan Sporting Club against nemesis Abahani Limited, showcased his frustration to on-field umpire’s decision twice in the game in an ugly way – first, kicking the stumps after umpire Imran Parvez turned down an LBW appeal and second, uprooting the stumps after the umpires called to bring the covers on due to rain.

Gazi Group Cricketers skipper Mahmudullah also lost his cool in a separate incident during their game against Prime Bank Cricket Club as he lied down on the adjacent pitch to show his dissatisfaction with an umpire’s call and he was later fined for committing a level-2 offence.

On both occasions, the umpires were at receiving and many alleged that the incidents happened as some of the umpires are known to be biassed towards certain clubs to make sure they get an advantage from the board.

Moniruzzaman, a promising Bangladeshi umpire, decided to quit umpiring after the recent fiasco with Mahmudullah as he feels he has had enough as far as umpiring is concerned and informed that they are mistreated by different quarters of the cricketing fraternity.

The umpires department is currently run by the incompetent director Saiful Alam Swapon Chowdhury and make-shift manager Abdullah Noman, who is expected to fill the role of an educator.

A member present in the meeting said that the president told them he hardly found any umpiring agenda in the board meeting and compared them with the ‘orphans’.

ICC international panel umpire Masudur, who was in the meeting with Nazmul, told The Daily Sun that BCB boss had assured them of solving their problems after hearing it from them.

Masudur said Nazmul informed them that he will also ask International Cricket Council the reason behind Bangladeshi umpires’ not being in their elite panel during their next meeting.

“BCB president said that he is going to talk to the authorities and find out what the faults are and why we aren't officiating international matches. He said he would later take steps to correct it,” said Masudur.

Sharfuddoula, who officiated two Tests, 48 ODIs and 31 T20Is as an umpire, said that they spoke about restructuring the current umpires committee.

“I feel we need to restructure the umpires committee to make it more vibrant,” said the senior umpire.

Match referee Neeyamur said that they have also spoken about the financial issues of the umpires.

“In the meeting, we spoke about development issues and we also informed him about our financial status compared to other countries,” Neeyamur said.