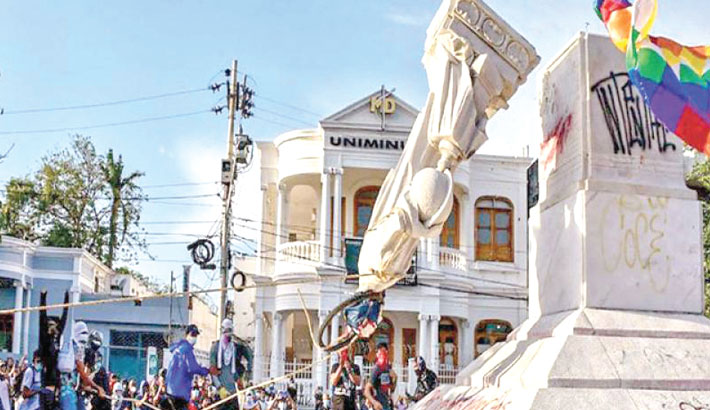 Anti-government protesters in Colombia have toppled a statue of Christopher Columbus in the coastal city of Barranquilla, reports BBC.

The figure of the European explorer, after whom Colombia is named, was dragged from its plinth with ropes and vandalised.

The demonstration marked two months since the start of a nationwide protest movement calling for social reform. Indigenous activists see Columbus as a symbol of colonialism and oppression. The mayor of Barranquilla said those responsible would be brought to justice. The Columbus statue is the latest to be pulled from its pedestal as part of the anti-government protests which have been sweeping through the country.

One of the first to fall was that of the 16th Century Spanish conquistador Sebastián de Belalcázar in the south-western city of Popayán in September.

A group of Colombians from the Misak, Nasa and Pijao indigenous groups said that they had toppled the statue after putting Belalcázar on trial and finding him guilty of genocide, enslavement, torture, rape and stealing their ancestral lands.

Since then, another statue of Belalcázar in the city of Cali has also been toppled.

In the capital, Bogotá, members of the Misak indigenous group demolished a statue of Gonzalo Jiménez de Quesada, the Spanish conquistador who founded the city in 1638.A statue of Queen Isabella of Castile, who sponsored Columbus’s 1492 voyage of exploration during which he first set foot in America, also recently became a target of Misak indigenous protesters in the capital, Bogotá.

Colombia’s ministry of culture has since removed the statue of Queen Isabella and another one of Christopher Columbus nearby “for safety reasons”.

Indigenous groups have been prominent in the protest movement which has rocked the country in recent months.

As well as being decimated by the Spanish conquistadors during colonial times, Colombia’s indigenous groups have more recently been caught in the middle of the country’s decades-long armed conflict.

Even after the signing of a peace agreement between the left-wing Farc rebels and the government in 2016, indigenous groups continue to be targeted by right-wing paramilitaries and dissident rebels who oppose the peace agreement.

More than 20 indigenous rights defenders have been killed this year according to a tally by peace institute Indepaz, and the indigenous groups are demanding that more be done to protect them.