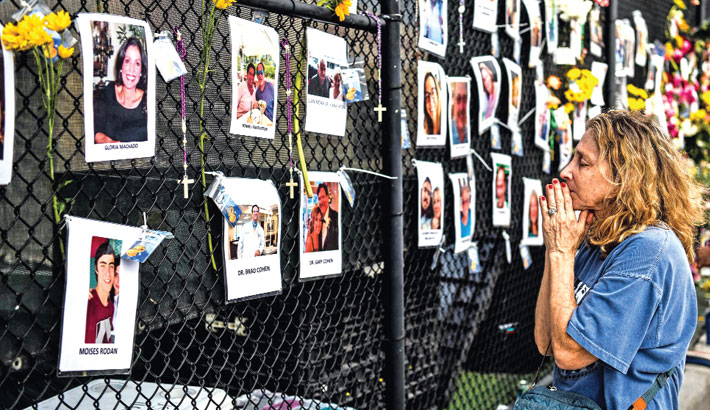 A woman prays in front of photos at the makeshift memorial for the victims of the building collapse, near the site of the accident in Surfside, Florida, north of Miami Beach on Sunday. – AFP PHOTO

SURFSIDE: The death toll after the collapse of a Florida apartment tower rose to nine, officials said Sunday, with more than 150 people still missing and their weary families waiting nearly four days for information as to their fate, reports AFP.

The outlook grew increasingly grim by the hour, however, as the slow rescue operation, involving workers sorting nonstop through the rubble in torrid heat and high humidity, carried on. Four new bodies and other human remains were found after rescuers dug an enormous trench -- 125 feet long, 20 feet wide and 40 feet deep (38 by 6 by 12 meters) -- through the mountain of debris, according to the Miami-Dade County mayor.

“As of now, the number of confirmed fatalities remains at nine,” Mayor Daniella Levine Cava told reporters in Surfside, near Miami Beach. She had said earlier that one victim had died in hospital.

“We have identified an additional four of the victims” for a total of eight identified, she said during a Sunday evening press conference. “We’re working to notify those next of kin first.” Six to eight squads, backed by two huge cranes and aided by sniffer dogs, are “on the pile actually searching at any given time,” she added.

She also said that “we did give all of the families an opportunity to privately visit the site.”

More than 100 people visited the site over the course of the day. Each of the three groups—one in the morning, one in the afternoon and one in the evening—was bused by the Miami-Dade police and fire departments and allowed to stay for an hour.

Florida Governor Ron DeSantis said debris with “forensic value” is being taken to a large warehouse to be inspected as investigators seek to determine the cause of the collapse.

And Surfside Mayor Charles Burkett said accommodation was being found for anyone wishing to evacuate the tower’s nearly identical “sister” building a block away, though no structural problems have yet been identified there.

Israeli and Mexican engineers and search-and-rescue specialists have joined an army of American workers at the site.

Teams in protective gear have been toiling round the clock since the early-morning Thursday collapse, but are only able to work a half-hour at a time before handing the job to the next crew.

“We don’t have a resource problem,” Burkett told ABC’s “This Week.” “We have a luck problem. We need to get more lucky right now.”

The 12-story oceanfront Champlain Towers South pancaked in the middle of the night Thursday as residents slept. Surveillance video of the collapse showed it coming down in just a few seconds.

Jake Samuelson’s grandparents, Arnie and Myriam Notkin, are among those missing, although his mother continues to receive phone calls from their landline, with only static on the other end, the family told local media.

“We are trying to rationalize what is happening here, we are trying to get answers,” Samuelson told Local 10 news, unaware whether the calls were from his grandparents or mechanical failure.

President Joe Biden said Sunday his administration would coordinate with local officials and was “ready to provide any support or assistance that is needed.”

“This is an unimaginably difficult time for the families enduring this tragedy,” he said in a statement. “My heart goes out to every single person suffering during this awful moment.”

Many members of the local Jewish community were among those affected by the tragedy, and Israel had vowed to help with the agonizing search.

“This is one of the best, if not the best, and the most experienced rescue teams, Israeli rescue teams,” Israeli diaspora affairs minister Nachman Shai said as the team arrived early Sunday.

About half of Surfside’s population is Jewish, including many members of the Hasidic Chabad-Lubavitch movement, according to the Israeli media.

So far, four victims have been identified by local police: Gladys and Antonio Lozano, respectively aged 79 and 83; 54-year-old Stacie Fang, whose 15-year-old son was rescued from the debris Thursday; and Manuel LaFont, also 54.

At least 18 Latin American nationals are among the missing—including Uruguayans, Argentines and Paraguayans. Canada has also said at least four of its citizens may be “affected,” without elaborating.

Families of the missing have expressed mounting frustration and anger at the wait as concerns grow about the building’s condition before the collapse. Officials who spoke Sunday repeatedly sought to reassure them that everything possible is being done.

“We’re moving as fast as we can, as hard as we can,” Miami-Dade fire chief Alan Cominsky told reporters.

Anger was fanned by news Friday that an engineer’s survey of the building in 2018 had pointed to “major structural damage” to a concrete slab beneath a ground-level pool deck, as well as “abundant” damage inside the parking garage.

Authorities have stressed that the reason for the collapse could take months to determine.