Shamim Hossain - The next man in finisher role 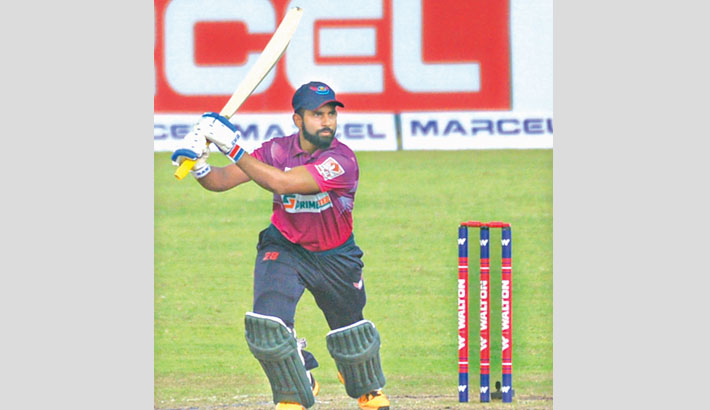 Shamim Hossain, the new kid on the block, said that he’s more focused to seize the opportunity after being selected in the national set-up for the first time.

The left-hander looks to be a genuine contender for the finisher role in the shortest format as the Tigers are eager to have a permanent solution in that position.

Bangladesh are eagerly looking for someone who can make runs at blazing speed coming down the order and the 20-year old looks fit for the role with his range of stroke play.

Shamim celebrated his national team call-up with a blistering unbeaten half-century (52 off 30 balls) for Prime Doleshwar against Prime Bank on Thursday in the ongoing Dhaka Premier Division T20 League and his consistent performance in the tournament made the selectors take notice of him.

“It’s great news for me and my family. I knew before the announcement of the squad that I might get an opportunity,” Shamim told The Daily Sun.

“But it’s more important to make the most of the opportunity. I have to repay the faith shown in me by the selectors,” Shamim added.

The Under-19 World Cup-winning member couldn’t showcase his mettle in the global event but that had a lot to do with his fitness more than anything else as many feel he was not 100 percent fit during the tournament.

Shamim, who is also a handy off-spinner, makes his presence felt through his fielding and many feel that at this moment he’s considered to be the best fielder around.

Shamim, who comes from Chandpur, a South-East district of Bangladesh, always inclined to make a mark as a fielder and according to his childhood mentor Shamim Faroki it was the fearless approach that made him different from others.

“He came to our academy (Chandpur Cricket Academy) when he was 12 or 13 and one could easily identify him from others due to his fearlessness,” said Faroki.

“The outfield of Chandpur Zilla Stadium is very uneven but even there he would dive without any kind of hesitation to save runs or take catches. At times we were worried whether he would get injured himself,” he added.

Shamim started his cricket career by playing in the local TV tournament along with cousins at the age of nine and although he was short in height, none could ignore him for his batting.

However, his cricketing ambition got a new height when he joined BKSP in 2015 and since then everything fell into place for him and he devoted most of his time to his passion for life in the lone sports institute of the country.

Though Shamim couldn’t flourish in the ICC Under-19 World Cup in South Africa, he didn’t waste his chance when he was picked for the High-Performance Unit against Ireland making 130 runs in four innings with an average of 130 while scoring an 11-ball 28 runs in the lone T20.

“After coming to the High-Performance Unit from the Under-19, I realised what actually I need to do. Though I batted at five, I went to number seven in the World Cup and that was quite difficult for me to adjust with it,” said Shamim.

“But now I’m more at ease with my batting because now I have understood where I will bat and how I need to operate,” he added.

Chief selector Minhajul Abedin is also excited with the 20-year old cricketer and said he feels he can be a great addition to the shortest format set-up.

“He has been monitored since he got included in the HP team. He did well against Ireland Wolves. He played very well in limited-over fixtures. Given his skill, he will be a great addition,” said Minhajul.