Sesame farming gets popular in Rajshahi 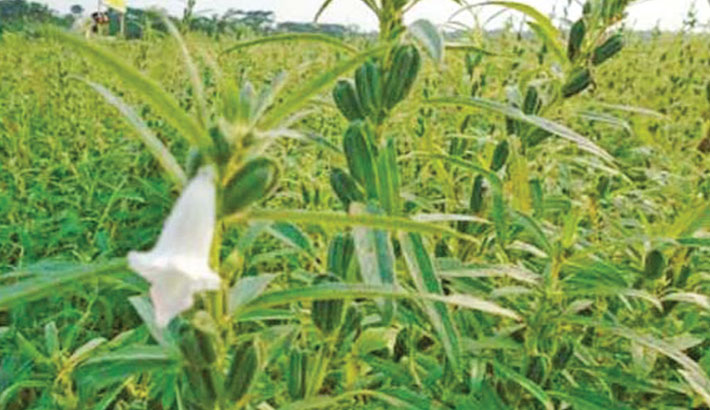 Sesame is being cultivated abundantly across Barind region as many of the farmers are getting lucrative price.

Farmers of the region showed more interest to grow the crops on a large scale.  Every season sesame farming is increasing gradually as they are getting handsome profit.

Getting repeated abundant production and good market price last year, hundreds of sesame cultivators of vast Barind tract were delighted. This year its cultivation expanded with the assistance of authority concerned.

At present, the farming fields have become eye-catching amid the grain filled condition and the farmers are expected to start harvesting by the end of this month.

Sub-Assistant Agriculture Officer Atanu Sarker said that cultivation of various high yielding varieties of sesame are gaining popularity among the farmers in the Barind region as they find it more profitable. He said they are supplying all necessary agro-inputs to the farmers so that they can grow the item without any hassle.

“We’re motivating the farmers towards boosting sesame cultivation through the best uses of modern technologies in the area,” he said.

A good number of growers said many grassroots farmers in the region have attained financial solvency through cultivating the crop commercially. They are expecting a bumper yield of sesame this season.

Mahbubur Rahman of Palpur village under Godagari upazila said, “I am growing the crop on around two and half bighas of land and expecting to make a profit of Taka 20,000.

He has cultivated Bari Til-3 and he’s expecting four to five mounds yield per bigha of land.

Jahangir Hossain, another farmer of Chaitanyapur village, has cultivated sesame for the first time on three bighas of land and he is happy over the present farming condition.

Cultivation of sesame, requiring moderate irrigation only once, is easier and less costly than other crops but brings good profit, he said.

Another farmer Rentu, has brought four bighas of land under the cash crop farming with hope of getting profit.

He said sesame farming between the gap of potato and Aman paddy cultivation periods helps earning additional money. It also makes the soil fertile. Jahangir Alam Khan, coordinator of Integrated Water Resource Management (IWRM) Project, said sesame farming can bring diversity in the existing cropping system of the drought-prone Barind area and that can be the effective means of mitigating its adverse impact of climate change.

He opined that prospects of large-scale sesame farming on the fallow lands are very bright in the Barind area.

On behalf of the IWRM project, more than 12.58 lakh community people of 2.66 lakh households are being motivated and encouraged towards cultivation of various less-water consuming crops like sesame to reduce the pressure on underground water.

The project is being implemented in around 1,280 drought-hit villages under 39 Union Parishads (UPs) and three municipalities of eight upazilas in Rajshahi, Naogaon and Chapainawabganj districts since 2014.

Sirajul Islam, additional director of Department of Agriculture Extension (DAE), said the pollination was well due to favorable weather condition and the plants are still unaffected by pest attacks or natural calamities.

He said that the farmers have cultivated sesame on 4,052 hectares of land in the region during the current season. Most of the plants have already passed the pod formation stage, he added.

The farmers were seen showing interest in cultivating the crop on more areas of lands after getting its bumper yield and good prices in recent years.

Agriculturist Islam said the crop requires lower production cost in terms of irrigation, fertiliser and labour compared to other Rabi crops, and less fertile lands, where other crops do not usually grow well, can be used for sesame cultivation, he said.

Farmers in the region have started growing Bari Til-3, Bari Til-4 and Bina Til 2 Bina Til 3 in the areas as the DAE and BARI authorities are campaigning for cultivating high yielding sesame varieties invented by Bari between the gaps of potato and Aman paddy.