Germany to give 340m euro as development fund 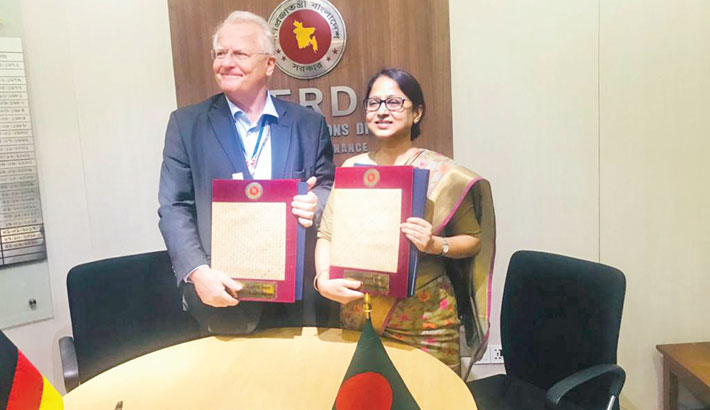 Bangladesh and Germany signed financial and technical agreements in Dhaka on Sunday.

The agreements followed the fruitful negotiations of the two governments held at the end of 2020.

Fatima Yasmin, secretary at Economic Relations Divisions of Bangladesh, and Peter Fahrenholtz, German Ambassador to Bangladesh, signed the agreements on behalf of their respective sides.

The signing ceremony was also attended by high officials from the German Embassy in Dhaka, the German Development Bank KfW, the German technical cooperation agencies GIZ and BGR, as well as from the Government of Bangladesh.

Germany has been providing financial and technical assistances for the development of Bangladesh since 1972, which amounts today to a total of over 3 billion euro. German–Bangladesh Deve-lopment Cooperation has a long standing history in supporting infrastructure, health, poverty alleviation, good governance and human rights, energy efficiency and renewable energy, climate change adaptation.

The present agreement marks the continuation of successful bilateral cooperation that contributes to the Sustainable Development Goals.

“We are glad to continue our support for the Bangladeshi success story,” said the German Ambassador.