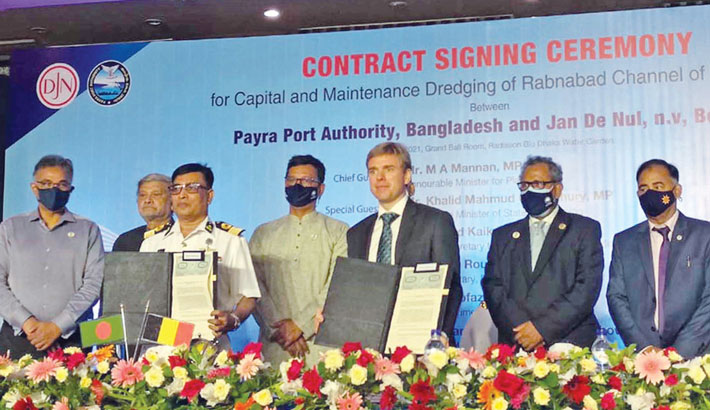 The government on Sunday signed a contract to carry out capital and maintenance dredging in the Rabnabad channel of Payra seaport to make it ready for entry of large ships.

After the capital dredging, the depth of the 75km channel will rise from the existing 6.3 metres to 10.5 metres allowing 40,000 DWT ships or container ships carrying 3,000 TEUs into the port.

Payra Port Authority and Belgium-based dredging company Jan De Nul (JDN) signed the formal contract at a function at a city hotel to carry out the dredging work at an estimated cost of Tk 49.50 billion.

“It is a historical moment for us. It also manifests the present capacity of Bangladesh,” State Minister for Shipping Khalid Mahmud Chowdhury said at the deal signing ceremony.

The entire cost of the dredging is being provided, for the first time, from the country’s foreign currency reserve, shifting from the costlier Public-Private Partnership (PPP) planned earlier.

With the move, the government says, it has been possible to save nearly 53 per cent of the cost proposed earlier under PPP.

Principal Secretary to the Prime Minister Dr Ahmad Kaikaus said: “It is an exception that cost of the project has been curtailed from the very outset whereas most projects cost goes up.” “It is also an example of balanced development.”

The country’s third seaport was launched in November 2013 and the first ship took berth at the port in August 2016.

Currently, the primary infrastructure of the port is being developed under a project in the first phase of the port development. The government has mid-term and long-term plans as well to turn it into an international quality seaport.

Once the under-construction Padma Bridge comes into operation, the port will help carry goods to Dhaka and other areas while improving regional trade with India, Nepal and Bhutan. The port will help reduce export-import cost, lower the price of industrial raw materials and make local products more competitive in the international market, according to shipping ministry officials.

“Prime Minister Sheikh Hasina is trying to move forward the country to the 21st century by carrying out huge development activities as dreamt of by her father. This will help the country for a step ahead,” Planning Minister MA Mannan said while speaking as the chief guest.

He observed that Bangladesh now has to look East and South as it is going through a big change in the mindset.

He said Bangladesh has no resource constraints or lack of courage, but sometimes lack of vigour or honesty is felt which should be addressed for making the country a prosperous nation.  On March 15 this year, Prime Minister Sheikh Hasina launched Bangladesh Infrastructure Development Fund (BIDF) to utilize the rapidly growing reserve money to provide funds to development projects. Payra port is the first receiver of the fund.  PMO Secretary Tofazzal Hossain Miah and Shipping Secretary Mohammed Mezbah Uddin Chowdhury also addressed the function.