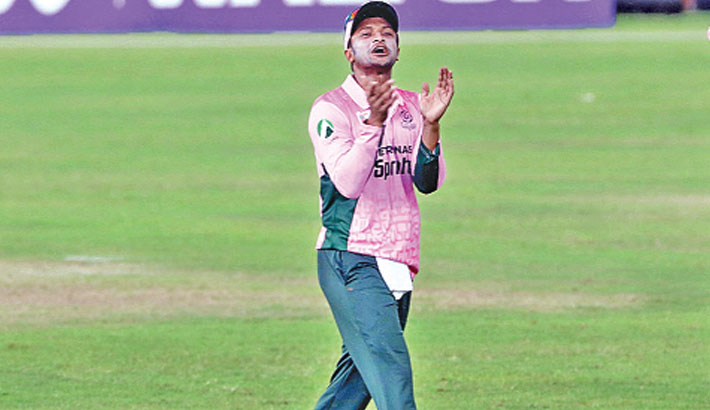 Shakib won’t be part of his team Mohammedan Sporting Club’s next three league matches in the ongoing meet with they are scheduled to play their eighth round match against Old DOHS at the BKSP-4 today.

“He was sanctioned under level three for two incidents that he was involved in and for that he was banned for three matches and fined TK five lakh,” CCDM Chairman Kazi Inam Ahmed told reporters after having a meeting with BCB President Nazmul Hassan Papon at his residence.

“We have just seen the match report and the sanction was done based on that,” he said, adding that BCB boss had asked them to find out the actual reason behind his indecent behaviour in the field.

‘Our board president called us and he is very much concerned and he wants to know the root behind it. We will have a board meeting after three days and he has made a committee to investigate the matter.

“We will sit with all the captains and managers of DPL clubs and would like to know if they have any objection regarding the ongoing tournament and take note of that,” he added.

Earlier, MSC skipper Shakib lost his temper and behaved rudely with on-field umpires on two occasions during their match against arch-rival Abahani Limited on Friday.

The first incident took place when his LBW appeal against Mushfiqur Rahim was turned down by umpire Imran Parvez and he furiously kicked the stumps and engaged in a heated conversation with the umpire.

In the following over he lost his cool again as he uprooted the stump out of despair and even tried to fix the stump in the opposite direction after umpires called to bring the covers on due to rain.

Shakib also gestured indecently pointing towards Abahani’s dressing room while returning back from the field after the game was stopped due to rain.

Abahani coach Khaled Mahmud, who is also a director of BCB, was seen coming furiously towards him at that point but it didn’t turn ugly as batsman Shamsur Rahman came in between to cool things down.

Later, Shakib went to Abahani's dressing room and resolved the matter before returning to the field when the game resumed. Shakib also apologised to the fans through a statement on his official Facebook page after the match.

An MSC official told The Daily Sun that they would request the authority to look into the matter extensively.

“We will appeal to the board and ask them that they must dig into the matter and see why Shakib was prompted to take such a step. Naturally, it was not acceptable but at the same time we have to find out why it happened,” MSC cricket committee chairman Masuduzzaman said.

This is the second time in the ongoing DPL when Shakib was involved in controversy as he earlier got away with a warning despite breaching the bio-secure environment after calling two additional net bowlers from his own cricket academy at BCB indoor training facility.

The 34-year old is no stranger to controversy having previously been suspended by BCB for six months in 2014 for attitude problems that included a lewd gesture on TV, beating a spectator in the stadium and travelling to Caribbean Premier League without a clearance.

Shakib was also banned by International Cricket Council for two years in 2019, with one year of that suspended, due to his failure to report corrupt approaches from a bookie.