Topu may lead against Oman 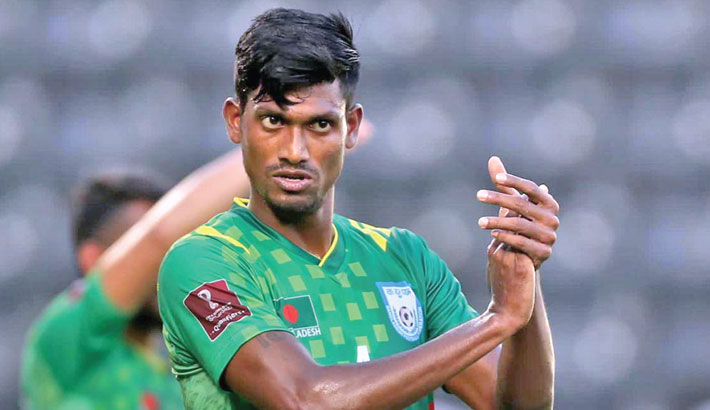 Veteran defender Topu Barman is likely to lead Bangladesh against Oman in their last match of the joint qualifiers round two for FIFA World Cup 2022 and AFC Asian Cup 2023 on June 15 after their regular skipper Jamal Bhuyan was suspended for the match.

Jamal, left-back Rahmat Mia and midfielder Biplu Ahmed are the three Bangladeshi booters to miss their final match of Group E at Jassim Bin Hamad Stadium in Doha as they received a suspension after getting yellow cards in their last match against India, the second time in the ongoing joint qualifiers campaign.

According to the FIFA bylaws, any player who received two yellow cards between the beginning of the tournament and the end of the quarterfinal round (instead of the end of the group stage matches) would serve a one-match suspension for the next game.

Jamal conceded the second card of the ongoing competition against India in the 80th minute while he received the first card against the same opponents in the first leg match in October 2019.

Rahmat and Biplo, who also conceded their respective second yellow card against India, received the first card against Oman and India respectively in their previous outings.

Midfielder Sohel Rana, who led Bangladesh in the Three Nations Cup in the absence of Jamal, returned home on Wednesday after sustaining an arm injury against Afghanistan while another midfielder Mashuk Mia Zoni was also ruled out of the last match due to an injury.

“Jamal, Sohel and three other players will not play against Oman. We have to rearrange the squad and make some changes to the game plan. Topu is the most senior and experienced player on the team at this moment. He will get the priority here but it will be confirmed on June 14. During this time we will also see the performance of other players,” said team manager Iqbal Hossain.

Topu has experience of playing the highest number of matches (34) for the national team after Jamal (50) and Sohel (39).

The 26-year-old centre back, who scored four international goals, also has previous experience to lead the national team in a match against Sri Lanka in Bangabandhu Gold Cup 2020.

Besides, Topu, along with Tawhidul Alam Sabuz, has been leading the country's top outfit Bashundhara Kings since December 2020.