Doleshwar remain unbeaten after fifth round 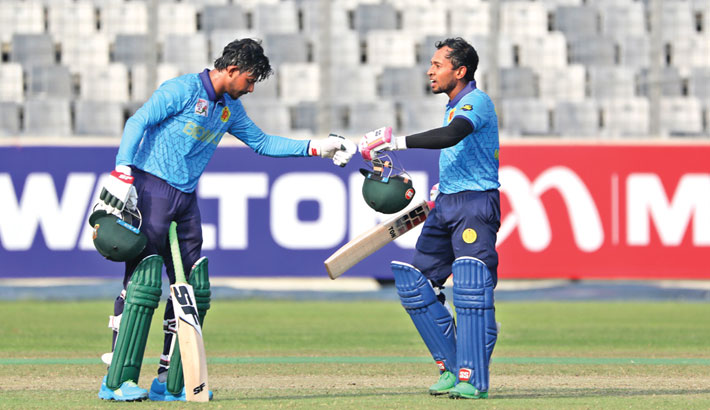 Prime Doleshwar Sporting Club continued their unbeaten run in the ongoing Bangabandhu Dhaka Premier Division T20 League as they beat Mohammedan Sporting Club by 22 runs in a rain-curtailed six-over per side match at the BKSP-4 on Tuesday.

Abahani Limited bounced back from their previous match defeat to register a seven-wicket win over Gazi Group Cricketers in their fifth-round match at the Sher-e-Bangla National Stadium in Dhaka.

Prime Doleshwar opener Imran Uzzaman struck 14-ball 41 while Shamim Hossain made 29 not out as they managed to score 78-4 in stipulated six overs before restricting Mohammedan to 56-4 with Shafiqul Islam picking three wickets for the winning side.

In-form Mushfiqur Rahim then struck an unbeaten 53 off 35 balls while Mosaddek Hossain made 50 off 28 balls as Abahani reached 153-3 in 18 overs to earn their fourth win in five matches.

After restricting Sheikh Jamal Dhanmondi Club to 133-9 at the BKSP-4, Prime Bank reached 134-3 in 19.3 overs with Rony Talukdar making the highest 48 runs to confirm their fourth win in the meet.

Rahatul Ferdous provided a stunning all-round performance as he first made 54 off 44 balls to guide Brothers to score 147-8 before chipping in with 4-34 to bowl Shinepukur all out for 114 runs in 19.5 overs at the BKSP-3.

This was the fifth consecutive defeat for Shinepukur in the ongoing tournament and they are currently placed at the bottom in the points table.

Rupganj earned their first win in the meet after defeating Shinepukur by 14 runs in Dhaka.

Rupganj scored 81-6 in stipulated 12 overs before they respected their opponents to 67-6 to hand them their fourth defeat in the tournament.

Opener Anisur Rahman made the highest 44 runs as Old DOHS scored 120-4 in stipulated 13 overs before they restricted Khelaghar to 103-5 to earn a 17-run win in their fifth match at the BKSP-3.