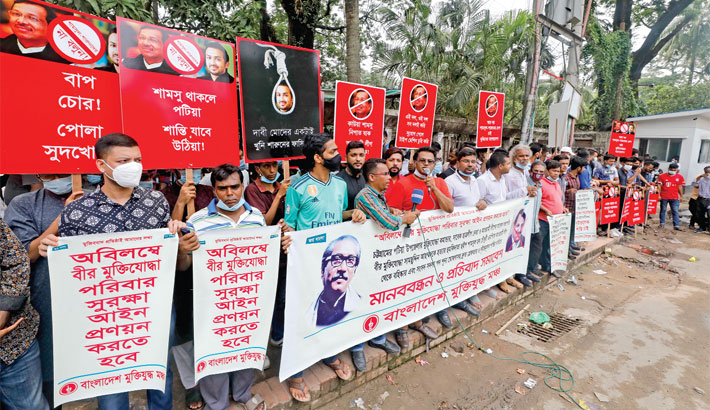 The platform of freedom fighters’ children also demanded exemplary punishment for Whip Shamsul Hoque, cancellation of his parliament membership and suspension of his membership from Awami League.

The demands came from a human chain and a protest rally held in front of the Jatiya Press Club in the capital on Sunday.

Aminul Islam Bulbul, president of the central committee of Bangladesh Muktijuddho Mancha, presided over the programme which was moderated by its general secretary Md Al Mamun.

“Bangladesh Muktijuddho Mancha is demanding immediate arrest of Shamsul Hoque and his exemplary punishment, including his expulsion from Awami League and declaring of his MP post vacant,” he added.

He also said Samsuddin Ahmed took up arms to liberate the country by risking his life. He fought for nine months and liberated the country. The senior politician also served as the commander of the Patiya Upazila freedom fighters’ council in Chattogram.

The 80-year-old freedom fighter has been threatened with beating by Shamsul Hoque, a lawmaker from Patiya in Chattagram, and his brother Mohammad Ali Nawab.

Besides this, Samsuddin Ahmed has been threatened to be undressed and showcased in the market area.

Samsuddin Ahmed came under attack by Whip Shamsul Hoque and his son for raising voice against their misdeeds, Rasha said.

He said the heroic freedom fighter, Samsuddin Ahmed, broke into tears after being humiliated disdainfully. The Whip and his family members continued to torture the AL leader and common people in the locality.

“By threatening to kill one of the heroic freedom fighters, Whip Shamsul Hoque and his son Sharun have proved that they never believe in the spirit of the liberation war. They are trying to implement the agenda of the Anti-liberation forces,” said Aminul Islam Bulbul.

“Shamsul Hoque was never affiliated with Awami League. He was involved in the politics of Juba Dal, a front organisation of the BNP. He preferred Jatiya Party politics during the regime of HM Ershad. Later, he switched to Awami League by joining Chattogram South Awami League unit,” said the president of Bangladesh Muktijuddho Mancha.

Ali Nawab and Sharun have also threatened that freedom fighter Samsuddin Ahmed will be striped and displayed to crowds.

In his address, Md Al Mamun said the family of heroic freedom fighter Samsuddin Ahmed is now feeling insecurity. His family members cannot go out in fear of reprisal.

Whip Shamsul Haque broke his oath by making statements against the government’s drive against casino in 2019, he said, adding that the lawmaker infringed customary law and the constitution.

“By doing so, Shamsul Haque lost his moral credentials as a Member of Parliament,” he opined.

An infiltrator who has taken a place in the Awami League, has been making a concerted effort to undermine the achievements of Prime Minister Sheikh Hasina through controversial activities one after another, he said.

He said Whip Shamsul Hoque, a new hybrid leader from the BNP and later from the Jatiya Party, spoke in support of casinos and gambling, proving that he was against the state's decision. He disobeyed state orders by supporting illegal casinos.

Sharun threatened to kill Didarul Alam, another heroic freedom fighter and also senior Awami League leader, for his protest against the casino business. But the trial of Sharun has not been done in that case till today.

Despite widespread criticism and repeated demands, casino supporter Whip Shamsul Hoque Chowdhury and Sharun Chowdhury are not arrested, he added.

He said no legal action has been taken against Sharun Chowdhury despite allegations of threatening to kill veteran Awami League leader Didarul Alam, displaying illegal weapons through social media, and inciting a bank official to commit suicide in Chattogram. Sharun is still out of jail. To date, law enforcement agencies have not taken any drastic action against him --- which is never desirable.

“How did Whip Shamsul and his son Sharun dare to threaten to kill a heroic freedom fighter? Where is the source of their power? Are they stronger than the state? Demand to the Prime Minister, expel Whip Shamsul Haque immediately from Awami League.”

“Why is he not being removed from the Parliament even after repeatedly breaking his oath? Judging by the past misdeeds of the Whip and his son, another heroic freedom fighter would not have received a death threat today,” he added.

He said Bangladesh Muktijuddho Mancha will submit a memorandum to the Jatiya Sangsad Speaker and the President of Awami League.

“Shamsul Hoque has to be removed from the party post of Awami League and Jatiya Sangsad. Otherwise, Bangladesh Muktijuddho Mancha will carry out toughest programmes with heroic freedom fighters and their children all over the country,” he added.

After the human chain and the protest rally, the leaders of the organisation staged a protest procession in front of the Jatiya Press Club.

Recently, Morshed Chowdhury, a banker in Chattogram, committed suicide due to persecution by Sharun. The banker’s family members blamed Sharun for instigating the suicide. A case against Sharun pending with the police sees no light for lack of action.

The Whip and his family members have allegedly unleashed a reign of terror in Patiya and also interfere in every development project and economic activities. They have been continuing their wrongdoings and amassing wealth illegally.