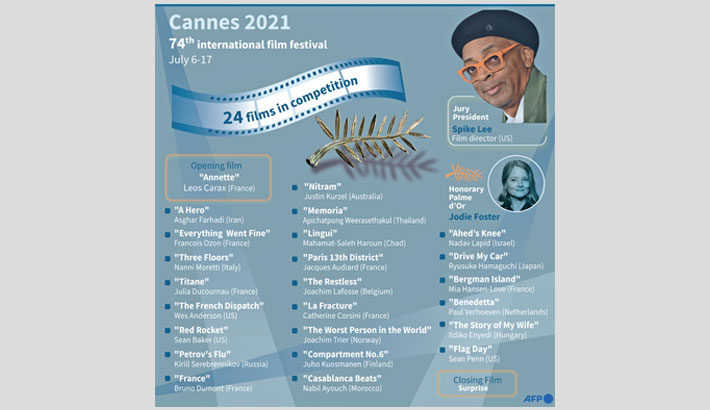 The Cannes Film Festival returns in July with a rich official selection competing for the Palme d'Or after the Covid pandemic robbed the world’s leading film festival of its 2020 edition, reports AFP.

Here are the 24 films competing from July 5 to 17 for the prestigious prize awarded by a jury headed by US director Spike Lee.

‘Annette’ by Leos Carax, France: Adam Driver and Marion Cotillard star as a glamourous celebrity couple whose lives are upended by the arrival of their first child. The first film in a decade from auteur Carax is also the first in English from the eccentric French mind behind arthouse favourites ‘Holy Motors’ and ‘The Lovers on the Bridge.’

‘The French Dispatch’ by Wes Anderson, US: Film fans can never get enough of Wes Anderson, and his latest quirky bauble can be counted on for more obsessively curated sets and shots, 20th-century nostalgia, family disharmony and Bill Murray.

‘A Hero’ by Asghar Farhadi, Iran:  The new film shot in Iran and in the Farsi language by the Iranian director Asghar Farhadi, known for "The Salesman," which won best Cannes screenplay in 2012, and "A Separation" -- both of which also won Oscars.

'Tout s'est Bien Passe' (Everything Went Well) by Francois Ozon, France : Featuring French stars Sophie Marceau and Charlotte Rampling, the film by Francois Ozon tells the story of a woman asked by her father to help him die.

‘Tre Piani’ (Three Floors) by Nanni Moretti, Italy: Exactly 20 years after winning the Palme d'Or with "The Son's Room" and nine years after heading the main jury at Cannes, Moretti is back with his first-ever adaptation of a novel, which looks at three families who live on three different floors, in three chapters.