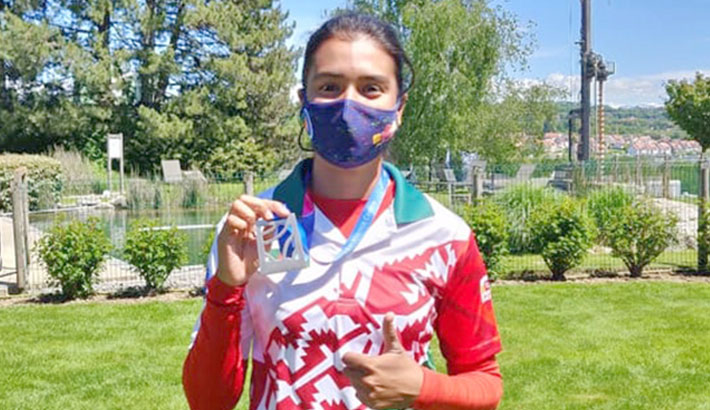 Bangladesh women recurve archer Diya Siddique targeted to make sure of the Olympic entry in the upcoming France World Cup stage three, scheduled to be held on June 21-27.

“My only target now is to make sure of the Olympic entry. I have a great chance at women’s singles and teams' events. I was eliminated from the second round of singles (women's) in Switzerland. So, I'll give my best effort here,” Diya told The Daily Sun on Monday.

“If we earn a quota in the teams' events, it will also be great. The whole women's team will get a chance to take part in the Olympics. So, I will try my best here as same as singles. The mixed team is a little bit complicated because our pair have to score more than the team's other pairs in the ranking round to play in the eliminators. So, it will be confirmed there,” she added.

Diya, pairing with Ruman Shana, earned her first-ever international silver in mixed events in Switzerland. She also reached the second round of singles beating Nada Azzam of Egypt by 6-5 set points. But the women team's performance was quite disappointing as the Bangladeshi girls were eliminated from the first round.

“I'm pleased with my progress in the world ranking. I have to score more to continue the progress. I normally score 630, but the international archers scored more than 670, I'm behind them. I'm now working on it in the camp,” Diya, who is in a 14-day quarantine at archery camp, further said.

Archery federation already confirmed a team for France World Cup including 8 recurve archers. Two recurve archers Abdur Rahman Alif and Nasrin Akter have been included in the team while Tamim has been sidelined due to a shoulder injury. Compound archer Asim Das has also been excluded as Bangladesh will not take part in any compound events. The team are expected to leave for France on June 6.