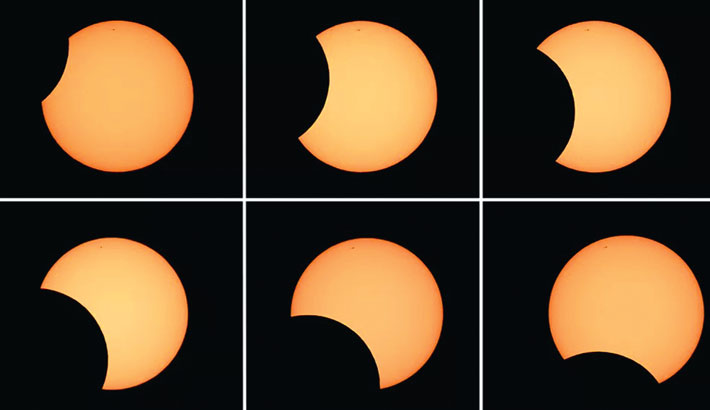 The sun and the moon are the creations of God. As a proof of this, Allah has given ‘acceptance’ to them. This is a sign of the power of God. The eclipse of the sun and the eclipse of the moon convey to his worshipers as a warning from God that these two, like other creations, are God’s creation. They are not worthy of worship. Since they themselves are in danger, from which they cannot defend themselves, they cannot be worthy of worshipping. Rather, considering these two as signs of knowing God is indicative of true intelligence. Allah the Almighty says, ‘Meaning’ and among His Signs are the day, the night, the sun and the moon. You shall not prostrate to the sun nor to the moon; Prostrate yourselves to Allah, Who created them, if you serve Him sincerely. [Surah Fussilat, 41:36]

In the pre-Islamic era, people used to think that the sun or lunar eclipse used to give the message of birth, death or disaster and famine et cetera of a great man in the world. Islam has called this a misconception and considered the eclipse to be a special time of crisis for the sun and the moon. For this reason, the believers have been instructed to stop other activities at the time of solar or lunar eclipse and to perform dhikr, tasbih, dua, salat, et cetera of Allah. Moon and solar eclipse in the light of Hadith:

By then the eclipse is over. When the prayers were over, he delivered a sermon praising Allah. He said, ‘The sun and the moon are two of the innumerable signs of Allah. No lunar or solar eclipse occurs as a result of someone’s death or birth. Therefore, whenever you see a lunar eclipse or a solar eclipse, call on Allah, proclaim His greatness and greatness, and engage in prayer. [Bukhari, Assahih: 1044; Muslim, Assahih: 901]

3. Narrated from Abu Bakr: He said, “We were with the Prophet (peace and blessings of Allah be upon him).” At this time the solar eclipse begins. The Messenger of Allah (peace and blessings of Allah be upon him) got up and pulled his cloak and entered the mosque, and so did we. He prayed two rak’ats with us until the sun came up. Then he said, ‘There is never a solar eclipse or a lunar eclipse because of someone’s death. When you see the solar eclipse, you will continue to pray and supplicate until this state is over. ‘[Bukhari, Assahih: 983] Numan Ibn Bashir It is narrated on the authority of the Prophet (peace and blessings of Allah be upon him) that he went out towards the mosque one day and the eclipse took place. Then he prayed in such a way that the sun became bright. Then he said, ‘The people of the age of ignorance used to say that the eclipse of the moon is not accepted without the death of a great person. But the moon and the sun are not accepted because of one’s birth or death, but they are two objects of God’s creation.

Allah Ta’ala creates whatever He wills in His creation. Therefore, if there is an eclipse between the sun and the moon, then you will continue to perform the prayers until it is enlightened or there is a new judgment from Allah Ta’ala. ‘[Nasai, Assunan: 1493]5. Narrated from Abu Musa. He said that there was a solar eclipse once in the time of the Prophet (peace and blessings of Allah be upon him). Then he stood up fearing that the great cataclysm of the Resurrection would take place. He quickly came to the mosque. He performed prayers with very long Qiyam, long Ruku and long Sijda. I have never seen such a thing in any other prayer. Then he said, ‘These signs sent by Allah are not for anyone’s death, nor for anyone’s birth. When you see some of these signs, you are in a state of panic and engage in remembrance, supplication and repentance of Allah. ‘[Muslim, Assahih: 1989] Eclipses (specially associated with the 7th date), from which another day or a primitive calendar is conceived.

An eclipse of the sun on June 25, 763 BCE is mentioned in an Assyrian inscription, which is very important for the chronology of the primitive East. There are also claims of more other solar eclipses in the east. Emperor Jung Kong beheaded two astronomers 4,000 years ago, Hisi and Ho, who are believed to have failed to predict a solar eclipse. Probably the earliest yet unconfirmed claim by Bruce Auntie, who allegedly linked an eclipse, which took place on May 10, 2606 BC, is the full story of some ancient floods.

Considering a possible meteor-effect in the Indian Ocean on the grounds, where there is a mention of a total solar eclipse. The eclipse is considered to be an occasion for prediction. The ancient Greek historian Herodotus wrote that Thales of Miletus foretold an eclipse that took place in the midst of an ongoing battle between the Medians and the Ledians. This eclipse caused the remaining uncertainty, although the matter has been read by hundreds of ancient and modern authorities. A possible prayer or aspiration was organised on May 26, 565 BC. Probably in Asia Minor near the Hellis River. Herodotus identifies an eclipse before Xerxes’ expedition against Greece, dated to 480 BC, which coincides with a circular solar eclipse marked by John Russell, which occurs in 48 BC.On 18 February. A partial eclipse was also observed from Persia, which occurred on October 2, 480 BC. Herodotus spoke of a solar eclipse in Sparta during the Persian Second Greek Invasion. The work of recording the eclipse of the Chinese began about 720 BC. In the 4th century BC, astronomer C. Sen described how the predictions of eclipses (sun or moon) were made by considering the relative positions of the moon and the sun. Radiating influence theory G. R. G. R.) existed among the Chinese. This thought was opposed by the 1st century philosopher Wang Chong, who made it clear in his writings that this theory was nothing new. The ancient Greeks, such as Parmenides and Aristotle, also supported the theory that reflected light was the cause of Chad’s radiation. Attempts have been made to establish the exact day of Good Friday in such a way that the darkness of Jesus’ crucifixion has been foreshadowed as a solar eclipse. Its research did not yield any final result. And Good Friday is marked as the date of the last Jewish feast of the Jews, which was organised during a full moon. Too much

Finally, according to the Sunnah, we should seek protection from Allah through prayers during the eclipse of the moon or the sun, and we should act accordingly and reject all superstitions and ignorance.

The writer did MA Kamil Hadith from Islamic University Dhaka. He is the health secretary of the Green Movement Executive Council, E-mail, [email protected]