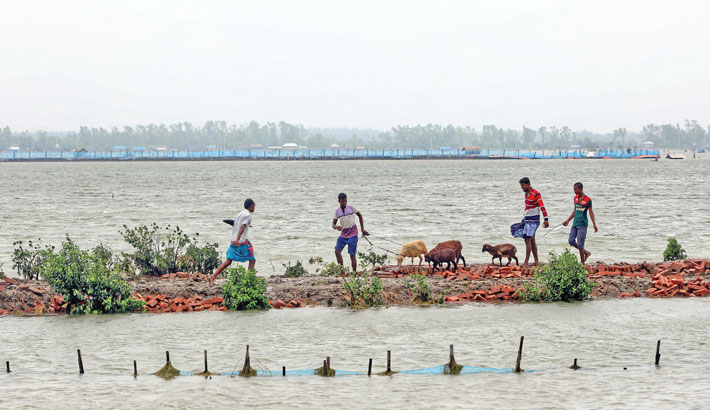 People are heading towards a shelter centre in Koira upazila of Khulna district on Thursday after tidal surge caused by cyclone ‘Yaas’ inundated vast tracts of land in the area. – SUN PHOTO

Vast coastal areas of Bangladesh have been submerged by high tidal surges triggered under the influence of the landfall of powerful cyclone Yaas in India.

The cyclone packing with gusts of up to 140kph and whipping up tidal surges battered the West Bengal-Odisha coast in India on Wednesday.

The cyclonic storm caused a loss of several lives and damaged hundreds of households, trees, fish farms and crops.

Authorities in Bangladesh reported flooding of villages due to heavy rains and tidal surges.

Yaas weakened on Thursday to a deep depression in Jharkhand state of India.

Under the influence of steep pressure gradient and the full moon phase, the low-lying areas of the coastal districts were inundated by 3-6 feet height above normal astronomical tide.

He said low-lying areas were inundated by the river water.

Huge numbers of houses, streets, embankments and structures in the coastal belt have been affected due to the gusty winds and tidal surges high than the regular astronomical tide during the storm. Hundreds of villagers along the low-lying coast of Bangladesh were marooned by floodwaters on Thursday in the aftermath of a powerful cyclone.

A total of 16,500 packet dry foods and other food have been allocated for the affected areas, it said.