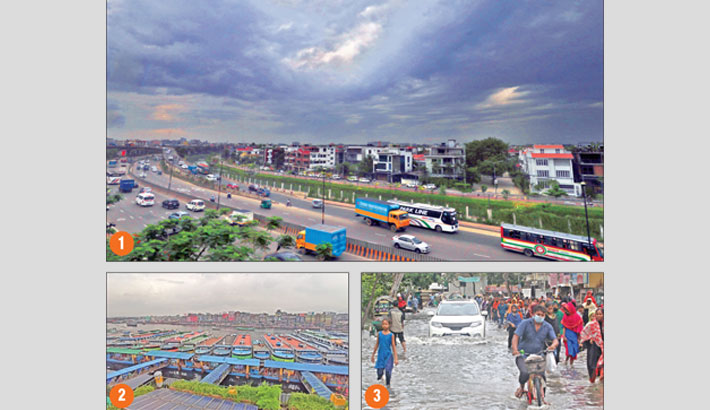 (1) Dense dark clouds seen hovering over the Dhaka city sky sinceTuesday noon ahead of the severe cyclonic storm ‘Yaas’. (2) Water vessels remain anchored at Sadarghat Launch Terminal as BIWTA suspends operations of all types of water vessels on most river routes across the country as precautionary measures centring the severe cyclonic storm ‘Yaas’. (3) A private car attempts to make way while people wade through knee-deep water through a waterlogged road at Beparipara in Agrabad of Chattogram. —Kamrul Islam Ratan/ Rabin Chowdhury

CHATTOGRAM: Residents of some low-lying areas in the port city experienced waterlogging under the influence of the cyclone ‘Yaas’ on Tuesday.

Water entered some houses and commercial establishments in Agrabad and adjoining areas following the waterlogging in the afternoon.

Chattogram may experience inundation by two to four feet height above normal astronomical tide, he said.

A bulleting of the met office also said the cyclone Yaas over northwest Bay and adjoining area moved northwestwards further and lied over the same area.

It was centred at about 555 kilometers southwest of Chattogram Port till 3:00pm on Tuesday. It was likely to move northwestwards further and cross north Odisha-West Bengal coast today noon.

Maximum sustained wind speed within 64 km of the severe cyclone centre was about 89 km per hour and rising to 117 kph in gusts.

All fishing boats and trawlers over the North Bay and deep sea were also asked to remain in shelter till further notice.

Meanwhile, the maritime ports of Chattogram, Cox’s Bazar, Mongla and Payra were advised to hoist local cautionary signal number three on Monday evening instead of  distant warning signal number 2 as the  depression over the Southeast Bay and adjoining Andaman Sea intensified into cyclonic storm ‘Yaas’.