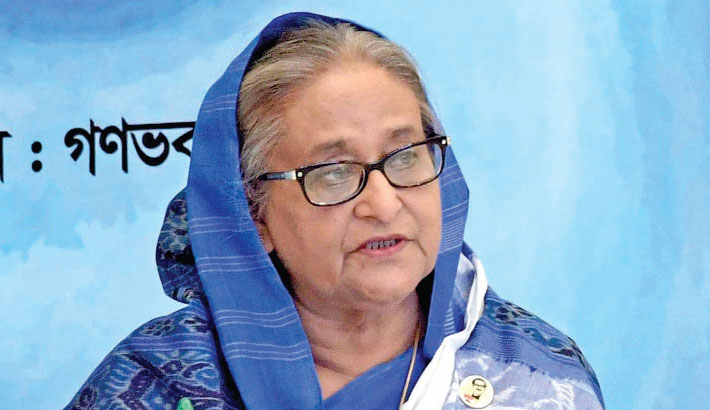 Prime Minister Sheikh Hasina on Sunday called upon the people to be cautious and aware to reduce risks of natural calamities.

“Now, we can know about cyclones earlier with the help of technology . . . be cautious and aware to reduce risks in any disaster,” she said.

The premier was addressing the inauguration and foundation stone-laying ceremony of 215 cyclone and flood shelter centers along with other infrastructures in the city’s Osmani Memorial Auditorium, joining virtually from her official residence Ganabhaban, reports BSS.

She also alerted the people of another cyclone which is approaching nearer, saying the cyclone is forming (in the bay) and due to the modern technology, now it could easily be known how long this will go.

Sheikh Hasina said the government has already started to take adequate precautionary measures. “In-sha Allah, we will remain alert and be able to minimize this hazard,” she hoped.

A video titled “Bangabandhu, the Pioneer of Disaster Management” was screened at the onset of the ceremony.

The Prime Minister laid the foundation stone of 50 Mujib Killas across the country in the ceremony.

“But, we have to move on overcoming all these hazards. We are moving ahead and will continue to proceed where Bangladesh will stand with its head high as a developed and prosperous nation globally,” she said.

Sheikh Hasina said the government had taken a number of measures to tackle the difficulties that appeared in each calamity and prioritized averting any possible loss of human lives. Talking about the loss of human lives in thunderbolt strikes, she said in the past people used to plant palm-trees near their houses to escape any casualty naturally from the thunderbolts.

“Once people had forgotten it, but now that sense of necessity (planting palm trees) has returned (to people),” she added.

The head of the government said whenever Awami League is in power it takes all-out efforts to save people from any calamity.

She continued that satellite telephones have been distributed to 13 coastal districts while toll-free “1090” service has been introduced to inform forecast of any disaster and daily weather information.