Shakib working hard to get back to his standard 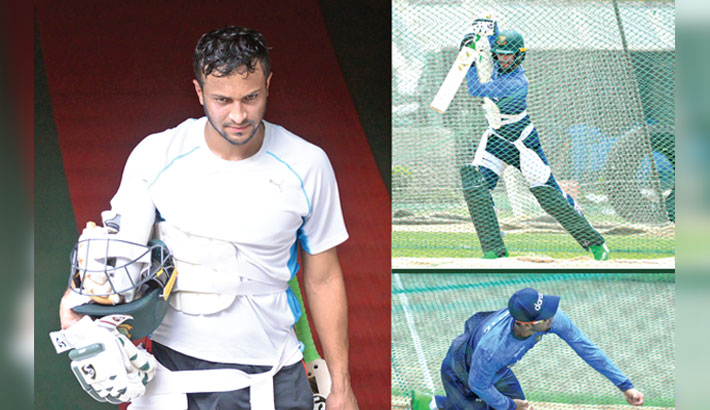 Bangladesh all-rounder Shakib Al Hasan takes part in both indoor and outdoor sessions at the Sher-e-Bangla National Stadium in the capital on Wednesday. — Tanvin Tamim

Bangladesh all-rounder Shakib Al Hasan is leaving no stone unturned to complete his preparation before facing Sri Lanka in the upcoming three-match ODI series, starting on May 23.

The current top all-rounder in the 50-over format is back in business after spending a substantial amount of time out of cricket considering he had no other option.

The 34-year old stayed inside his hotel room for nearly 17 days, firstly due to IPL and second for the 14-day mandatory institutional quarantine that he had to go through following his arrival from the cash-rich tournament in India, which was postponed midway.

Although Bangladesh Cricket Board managed to relax his institutional quarantine for two days that paved the way for Shakib to join his other national team-mates, the southpaw had a better idea about him and he sweated it out more than anyone else in the training session to reach his standard. Probably that is the only reason he opted to stay back and had an individual batting session in the indoor for nearly 40 minutes in the afternoon when his team-mates headed for the hotel following their routine practice session under the scorching heat.

“It’s too hot,” Mosaddek Hossain, who was accompanying Shakib as his partner in the net, told The Daily Sun while he was trying to get some energy back by drinking water.

There is a saying in the cricket fraternity that bowling comes naturally to the left-arm spinner and he preferred to get back his confidence by having a prolonged bowling spell in the academy nets.

Shakib did manage to trouble Mahmudullah while he was also seen disappointed as assistant coach Mizanur Rahman didn’t pay any heed when he was convinced that Tamim Iqbal was plumb in-front trying to play a reverse sweep off him.

The left-arm spinner managed to bring Tamim out of the crease on few occasions and the left-hander had his share of luck by playing some beautiful shots but what sets Shakib apart from others is that he never looked out of sort for once during his bowling despite bowling after a gap of nearly three weeks and before that not getting a place in Kolkata Knight Riders playing XI in their last couple of matches.

Shakib didn’t have a similar outing when his turn came for batting in the national nets and looked utterly disappointed to miss out a couple of shots that he tried against Jon Lewis, who was feeding him deliveries with his stick.

Shakib is expected to play at number three and it was evident from the fact he spent a substantial amount of time in the centre wicket where pace bowlers were operating and the pull against pace bowler Shoriful Islam surely would keep him in a good mental state.

However, it wasn’t enough for him to be satisfied as he batted in the indoor against the spinners following his departure from centre wicket while he ran a mile more than others by battling it out against the bowling machine.

Bangladesh head coach Russell Domingo remained a constant figure during all his activities in the nets whether it is bowling or batting and wanted to make sure his best weapon in the armoury is completely equipped and comes out all guns blazing.