Over 300 wounded as violence flares at Al-Aqsa mosque 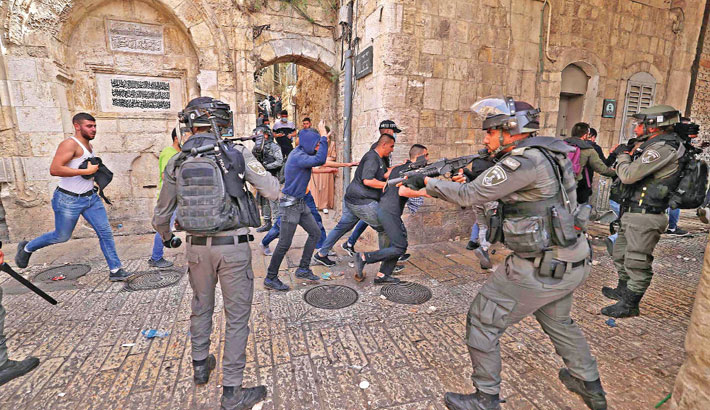 Palestinian protesters run from Israeli security forces amid clashes in Jerusalem’s Old City on Monday, ahead of a planned march to commemorate Israel’s takeover of Jerusalem in the 1967 Six-Day War. —AFP PHOTO

JERUSALEM: More than 300 people were wounded on Monday in renewed clashes between Palestinians and Israeli police at the flashpoint Al-Aqsa mosque compound, as an Israeli celebration of its 1967 takeover of Jerusalem risked inflaming tensions.

Loud booms and angry screams echoed from the ancient stone walls of the compound, revered by both Jews and Muslims, where Palestinians had built makeshift barricades and the ground was littered with rocks, stun grenade fragments and other debris.

Israeli police restricted access to Al-Aqsa to Palestinians aged over 40, checking identification of anyone who wanted to access the plaza.

Following a call from Al-Aqsa’s director, Sheikh Omar Kiswani, worshippers later cleared the plaza of debris so prayers during the holy month of Ramadan could resume.

The violence since Friday has been Jerusalem’s worst since 2017, fuelled by a long-running bid by Jewish settlers to evict several Palestinian families from their nearby east Jerusalem Sheikh Jarrah neighbourhood.

A Supreme Court hearing on a Palestinian appeal in the case originally set for Monday was pushed back by the justice ministry due to the tensions.

Despite mounting international condemnation, Prime Minister Benjamin Netanyahu voiced support for the Israeli police’s “just struggle”, praising the “steadfastness that the Israeli police and our security forces are currently displaying”.

Police said Jewish “prayers continue as usual” at the Western Wall, which adjoins the esplanade, adding that “we will not let extremists threaten the safety of the public”.

The UN Security Council was to hold an informal meeting at Tunisia’s request later Monday on the unrest that has escalated since the last Friday prayers of Ramadan.

There were fears of further violence ahead of a march Monday by Israelis to commemorate the takeover of Jerusalem in the 1967 Six-Day War, an anniversary known as “Jerusalem Day” in the Jewish state.

An AFP journalist saw crowds of Palestinians and Jews shouting angrily at each other on one of the Old City’s narrow, cobblestone streets—separated only by a few police officers—in an indication of potential hostilities if the evening march moves through the Old City as planned.

Palestinians had erected barricade of wooden planks and metal sheets to ensure Jews—who call the Al-Aqsa compound the Temple Mount—did not enter, but police had previously indicated Jews would not be permitted at the site on Monday.

The Palestinian Red Crescent put the toll from Monday’s clashes at 305 injured, including more than 200 who were hospitalised, five of them in critical condition.

The Israeli police reported nine injuries in their ranks.

When “you mean to harm someone, you shoot at the head,” he told AFP.

Near the Old City, an Israeli driver was pelted with stones, lost control of the car and rammed it into Palestinians, according to police and footage from a journalist on the scene.

Once stopped, the vehicle was attacked by around a dozen people who continued to hurl projectiles at the passengers before an Israeli policeman dispersed the crowd by firing into the air.

The Israeli role in the hostilities at Al-Aqsa, Islam’s third holiest site, has met widespread criticism.

All six Arab nations that have diplomatic ties with Israel—Egypt, Jordan, the United Arab Emirates, Bahrain, Morocco and Sudan—have rebuked the Jewish state.

Turkey, which also has formal relations with Israel, called it an “apartheid state” that must end the “heinous and cruel attacks” against Palestinians.

The Middle East quartet of envoys from the UN, US, EU and Russia—and Pope Francis—have all called for calm.