Half of population still out of mobile network 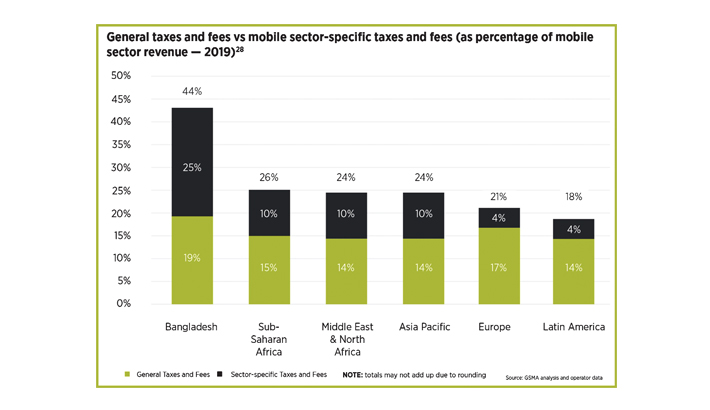 Mobile sector’s tax contribution in Bangladesh is considerably higher than the average of Asia Pacific and other regions, which could limit the country’s digital transformation, said GSMA in a report.

The worldwide platform of mobile operators said despite the expansion of mobile coverage, about half of Bangladesh’s population remains unconnected to a mobile network.

GSMA report published in May 2021 said while Bangladesh has one of the highest levels of 4G coverage by population (95%) in South Asia, about 109 million Bangladeshis (67% of the population) do not use mobile broadband despite living within the footprint of a mobile broadband network.

“As the main way for citizens to access broadband connectivity, mobile is at the centre of the digital transformation. Tax policy should be aligned and supportive towards achieving Digital Bangladesh objectives,” GSMA added.

According to it, the mobile sector tax regime could be made more conducive to the country’s transformation to a digital economy.

It suggested aligning mobile sector’s taxation with rest of the economy, streamlining the tax assessment mechanism and reducing sector-specific taxes on mobile consumers.

GSMA called for removing the SIM tax of Tk 200 and eliminating 15 percent supplementary duty and 1 percent surcharge on mobile internet and on the purchase of non-telecom services using airtime.

“Reforming mobile sector taxation would trigger greater adoption and usage of mobile connectivity. This would generate higher GDP and tax receipts for the government in the medium term from the increased economic activity and productivity across the economy,” it said.

A GSMA analysis showed if the minimum turnover tax was reduced as proposed, it would add $475 million to the country’s GDP and annual gain in tax revenue would be $47 million.

It also said the corporate tax reduction as proposed would add $ 131 million to the GDP and $ 14 million as annual gain in tax revenue.

GSMA represents the interests of mobile operators worldwide, uniting more than 750 operators with almost 400 companies in the broader mobile ecosystem, including handset and device makers, and internet providers.

“Mobile connectivity is an important driver of economic growth across all sectors,” it observed. In Asia, the International Telecommunication Union (ITU) estimates that a 10% increase in mobile broadband penetration would yield a 0.51% to 2.43% increase in GDP per capita, the platform said.

It emphasized that a conducive regulatory environment, especially the tax framework, is required to accelerate countries’ digital transformation and maximise the benefits of connectivity.  “This is particularly relevant as Bangladesh now faces the challenge of penetrating low-income groups to connect the unconnected,” it stressed.

Mentioning the Planning Commission’s 8th Five-Year Plan, it said, “The ICT Division plans a ‘revision of tax, VAT and surcharge to decrease internet price’ during the financial year 2022. This action contributes to Action Agenda: ‘Universal affordable access to internet’.” “Furthermore, the 8FYP highlights that the heavy taxation of ICT services has constrained the use of smartphones and internet services, limited the private-sector-led supply of ICT infrastructure and lowered service quality.” “Based on this, the 8FYP concludes that the reform of ICT taxation is an essential policy reform that will provide a substantial boost to GDP growth and employment in Bangladesh,” GSMA report added.

In 2019, the total tax contribution of the mobile sector, amounting to BDT 119 billion ($1.4 billion), represented about 44% of total sector revenue. This is substantially higher than the Asia Pacific average (24%) and the global average, the report mentioned.

“When annualised one-off spectrum licence fees are taken into account, the total tax contribution of the mobile sector represents 49% of revenue ($1.6 billion).”

It said the high tax contribution is due to sector-specific taxes, representing 56% of total tax payments (25% of revenue). These are paid in addition to other, economy-wide, general taxes (19% of revenue).”

The more burdensome sector-specific taxes include the supplementary duty on mobile services, the sector-specific share of corporate tax, and minimum turnover tax and the BTRC revenue sharing fee, GSMA added.

Despite the expansion of mobile coverage, about half of Bangladesh’s population (46% unique-subscriber penetration) remains unconnected to a mobile network in 2020, the report of GSMA also said.