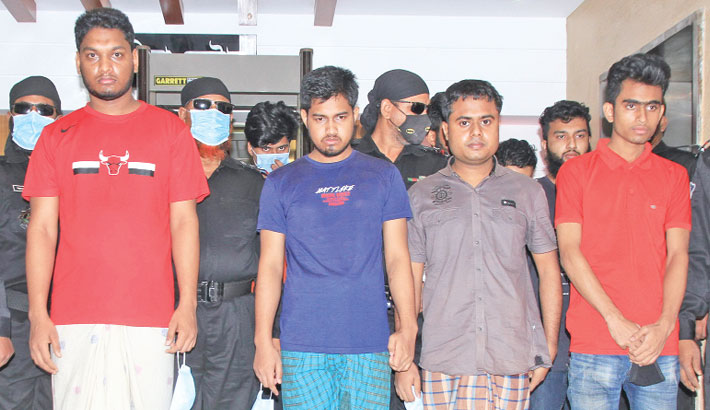 Rapid Action Battalion (RAB) nabbed 12 illegal bitcoin traders, including the ringleader, during a raid on an office in North Badda in the capital on Monday.

A team of RAB-1 raided the office of Basic Biz Marketing Ltd and held them.

Commander Khandaker Al Moin, director (legal and media wing) of the elite force, said this at a press conference at RAB Media Centre in the capital’s Kawran Bazar area.

Bitcoin is a decentralised digital currency that can be sent from user to user without mentioning the identities of sender and receiver. Money is now being widely laundered from Bangladesh to other countries through bitcoin.

The RAB officer said that they had long been dealing in bitcoin and also cheating people in various ways through Basic Biz Marketing Ltd, a so-called outsourcing company.

Sumon, who did his master’s, is the owner of the outsourcing company. He had been involved in the trade since 2013, the officer said.

At first he began the illegal trade on a limited scale, but recently expanded his business. His office is on three floors of a building and has 32 employees.

Sumon made a quick buck through the trade and owned two flats, plots and shops in the capital.

During interrogation, he said that he has a virtual wallet in which he has $100,000.

Sumon said that he transacted about $12-15 lakh through bitcoin over the last few years.