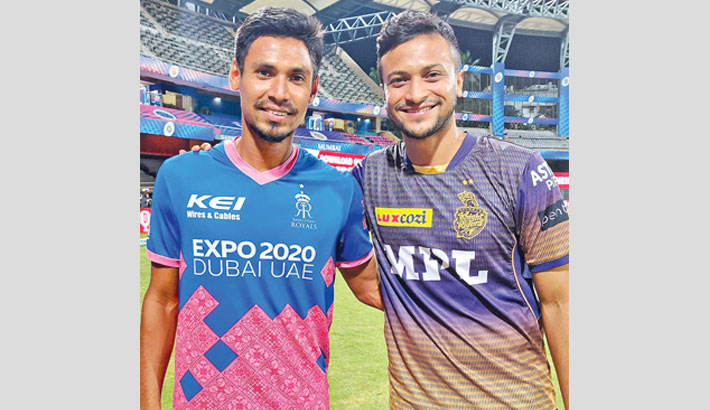 Shakib Al Hasan and Mustafizur Rahman may have to return home earlier than the original schedule due to the new quarantine rule imposed by the health ministry, a Bangladesh Cricket Board official on Monday.

“We have asked them (Shakib and Mustafizur) to let us know what is their plan for the next 15 days while we have also asked the health ministry to know what kind of quarantine protocol they need to follow after arriving in Bangladesh,” BCB Chief Executive Officer Nizamuddin Chowdhury told The Daily Sun.

“If the health ministry suggests that they (cricketers coming from India) will have to follow seven or 14 days quarantine in that case they have to return earlier than the previous schedule from IPL but we have to know first what will be in place for them.

“We are bound by the Bangladesh Government rules and will take decisions according to the guideline provided by the government,” he added.

Shakib and Mustafizur, who are playing for Kolkata Knight Riders and Rajasthan Royals respectively in the ongoing IPL, were expected to return on May 19 and join the team after completing three-day quarantine for the three-match ODI series against Sri Lanka, scheduled to start from May 23.

However, BCB will need special permission from the Directorate General of Health Services if the duo plan to return as planned earlier as DGHS had issued a new quarantine rule on May 1 which stated that travellers coming from India and South Africa will have to go through 14-day quarantine before resuming work in the country.

Earlier, BCB managed to reduce the quarantine policy for their foreign coaching staff and cricketers but due to the second wave of coronavirus chances are slim that the quarantine period will be reduced coming from these two countries.

Bangladesh team is expected to return from Sri Lanka today and they are not expected to follow the same quarantine rule.

BCB also needs to know what kind of quarantine protocol their South African coaching staff - head coach Russell Domingo and fielding coach Ryan Cook – need to follow as they are expected to travel to South Africa from Sri Lanka and later join Bangladesh team ahead of the Sri Lanka ODIs.